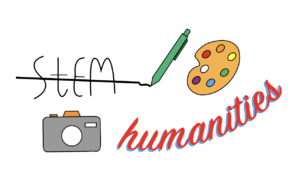 Photo by Anamika Anand
Passion lies in the humanities field for the minority of students.

Permalink
While the majority of SHS students go on to study STEM majors in college, others plan to pursue humanities subjects such as film, art and writing both in college and as a career.

Saratoga High is known for its large STEM-oriented population, with a sizable number of the Class of 2022’s seniors majoring in computer science, engineering and other technical fields. However, some students are diverting from this trend to pursue their passions in the humanities and communications fields.

Senior Alexander Schroeder is the creator behind a  YouTube Channel with over 184,000 subscribers and 80 million views that he said “accidentally went viral.” Having loved film since elementary school, Schroeder took advantage of the Media Arts Program throughout his high school career.

“Film is the best version of telling a story,” Schroeder said. “The visuals add deeper context than any other medium can.”

Schroeder most enjoys the storyboarding aspect of creating a film, since it allows him to think of his script as a visual language of its own that can be applied into a film.

Confident that he can pursue film as a career, Schroeder will major in film and television at the Savannah College of Art and Design. Even though most of his peers are going into STEM, Schroeder knows film is what he wants to pursue, whether it be directorial films or commercials.

Although he understands the fear many students have of not being able to apply art forms into careers, Schroeder is hopeful for the future.

“There’s more appliances to film in a career than people realize,” Schroeder said.

Senior Nandini Desai initially thought that traditional art was most ideal for her. She started drawing and painting at age 7 before discovering graphic design at age 15, soon shifting her desired focus to the latter.

“Art is very much creating for yourself and self-expression, whereas design is really thinking about what other people want, knowing your audience and who you’re creating for,” Desai said.

Desai took ceramics in her freshman year and then AP Art outside of school in her junior year.  At first, she focused on visual art — she wanted to work in an art studio where someone could assist her with creating her pieces and help her develop core skills. However, the isolation that came with the pandemic ended up making her pieces more self-driven and independently created.

In the summer of her junior year, Desai participated in a program centered around game design and development, where she realized her deep passion for design.

“I really enjoyed making something that was aesthetically pleasing as well as very usable,” Desai said. “Rather than just looking at my pieces, it’s something that people can actually interact with.”

In addition to AP Art and the summer program, Desai also took classes in graphic design at Mission College during her senior year. In order to get more industry experience and see what type of work a graphic design major would likely have as their career, she worked with a startup called San Jose Strong in her senior year. Desai helped the website make graphics, logos and app layouts for people to find opportunities to volunteer for events such as political protests and educational workshops.

Looking forward, Desai wants to use her graphic design skills to go into user interface and experience design, such as making app layouts like she did with San Jose Strong. When applying to college, she focused on schools that combine design interface with cognitive science.

Desai will be attending UC San Diego with a double major in cognitive science and interdisciplinary computing, as well as the arts with an emphasis on design and interaction.

“It’s a pretty niche major, but I want this to be my career,” Desai said.