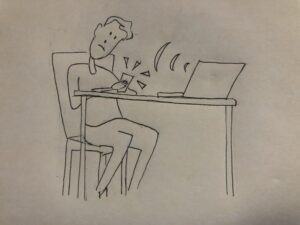 Junior Bella Lin stared blankly at her computer screen as her teacher continued to lecture. Despite paying attention for the last hour and a half, Lin still didn’t understand the concept her teacher was explaining in class. Confused, Lin pulled out her phone and texted a classmate through Facebook Messenger, receiving an in-depth reply in minutes.

This means of fast in-class communication with other students is one of the benefits that Lin points out in regards to having cell phones readily accessible during online classes.

During the past year of virtual school, both teachers and students have noticed a dramatic increase in student phone usage during class. Some students have managed to curtail the temptation of in-class phone use, while others have used it to their advantage.

One clue, said junior Rashmi Edamula,  is that she can often  “see people in class looking downwards at something, most likely their phones.”

In response, many teachers have implemented methods to prevent phone use in class. For instance, math teacher PJ Yim can usually tell if a student isn’t paying attention through their body language and facial expressions.

Junior Ashley Ko, who is in Yim’s sixth-period Calculus AB class, said Yim will usually check in or call on specific students if he catches them randomly smiling in class. Yim’s line of reasoning, she said, is that if people are concentrating on math, they shouldn’t be smiling.

“Sometimes, [when he catches people talking], Mr. Yim stares at his monitor and pauses for a while and then goes back to lecturing,” Ko said.

Most of the time, however, Ko said that Yim will use other tactics to incentivize students into paying attention — such as making jokes.

“I think it’s interesting how instead of passive aggressively calling people out [for being on their phones], he makes a targeted joke in a way that makes students want to pay attention and not be the joke,” Ko said.

However, other teachers have responded differently.

English teacher Erick Rector said that, although he knows that students are using their phones in class, he hasn’t tried to stop it because he trusts them to make the correct decisions for themselves.

“I can definitely tell when a student is on their phone because of their head position or if they haven’t been contributing  a lot,” he said.

Rector said that, while he doesn’t have any explicit policies, he does try to call on students when they’re not paying attention to “round their attention” back to the Zoom classroom.

“Overall, I think there should be a sense of trust between students and teachers, so I just try my best to keep my class engaging,” Rector said.

Similarly, while Biology teacher Cheryl Lenz has noticed instances of students using cell phones or viewing other tabs during class, she has not implemented countermeasures because she believes that it is each student’s responsibility to manage their own distractions.

“I don’t believe there is a solution to this issue [on a teacher’s part],” Lenz said. “Students will distract themselves inside or outside of school. Some do not have the ability to maintain focus, especially online.”

Edamula agrees that it shouldn’t be a teacher’s responsibility to dictate phone usage.

While Edamula sees the benefit of having access to a cellphone while in class, she said that it is “definitely harder” to pay attention, especially when her phone is right next to her and ringing with notifications.

Both Edamula and Lin said that they believe the majority of their on-the-phone peers are not playing games or watching videos, but, rather, texting other classmates to “make up for the lack of interaction in virtual classrooms,” Lin said.

“I actually don't think having phones readily accessible in class has affected class in a dramatic way,” Lin said. “It probably helps us more than it hurts us in many situations.”