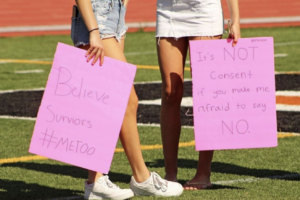 Los Gatos High class of 2018 alumna Abbi Berry stood on a stage on her alma mater’s football field on July 26 in front of a sea of people dressed in pink, white and black. She scanned the crowd before going up to the microphone and sharing her story of sexual assault while attending the school.

“I believe words have power, and if saying this out loud gives others reason to as well, then I will,” Berry said. “My name is Abbi, and I’m a survivor of sexual assault, harassment and rape. And I still believe in the power of words.”

Berry is one of the leaders of the student organization From Survivors For Survivors, which organized the Stand for Survivor Solidarity march after over 160 Los Gatos High School students came forward this summer about their sexual assault and harassment experiences on the Instagram account @metoolghs. In accordance with social distancing guidelines, a mixture of community members and students from Los Gatos High, Saratoga High and nearby schools stood together in support of the survivors, listening to guest speakers as they advocated for reform at both schools in the district.

“I hope this movement opens people's eyes to the rape culture existing within our community,” Los Gatos High senior and event organizer Sasha Ryu said. “[A few months ago], I had no idea that so many of my friends had experienced sexual violence during our time together at Los Gatos High. It breaks my heart that, for so long, they were in an environment where they didn't feel safe enough to tell their stories.”

The movement was sparked in late June when a Los Gatos High sophomore shared her experience with sexual assault with peers through an Instagram post. Inspired by the sophomore’s story, Berry published an Instagram post on July 7 detailing her concerns about the prevalence of so-called rape culture at Los Gatos High, especially criticizing the school’s football team.

A similar Instagram account to @metoolghs, @metooshs, was later created to bring attention to the experiences of Saratoga High students. In light of these experiences, other accounts designed to raise sexual assault awareness were also created, and the members who originally founded @metoolghs soon decided to take their message to a wider audience through the Instagram account @fromsurvivorsforsurvivors, a platform “dedicated to sexual assault awareness, education and recovery.”

The hopeful message has resonated through the community and inspired policy reform efforts at Saratoga High. After seeing the sexual assault stories of Los Gatos High, seniors Emily Choi and Isabelle Lee teamed up with the administration and juniors Apurva Chakravarthy and Kaylie Wong to start the Culture of Consent Task Force. The task force aims to provide support for survivors at the school and push for comprehensive awareness education in the school’s curriculum.

According to Lee, the task force works to discuss issues and brainstorm solutions specific to the school’s culture and community. They are supported by faculty members such as principal Greg Louie and assistant principal Kerry Mohnike.

“I was personally motivated to join this task force from an experience I had in my sophomore year,” Lee said. “It wasn’t until May of junior year that I was really ready to confront my own issues and make a difference for others. We’re really just four students who are passionate about this issue and want to change the culture of consent at our school.”

In the weeks prior to the start of school on Aug. 13, Mohnike and the administration were notified by the community of the pressing issues and calls to action of @metooshs. Based on feedback from students and parents, the district decided to roll out the Unity Makes Community webinar designed to inform students of the various resources available to them.

The district is reviewing the code of conduct for extracurricular activities, and administrators are meeting with focus groups such as the task force,  planning a mailing campaign to families in the district and looking for suitable culture of consent resources to enhance learning.

To find a learning space for this topic at school beyond a unit in health class, Mohnike said the school has shifted its focus to finding and implementing age-appropriate and effective resources and materials.

“The respect a person has for the boundaries of another is something that is developed first in the home and then supported by the wider community,” Mohnike said. “The #MeToo movement highlights that people can find themselves victims of individuals that either do not care or do not understand the respect that everyone deserves.”

The road to reform has not been easy. Advocates and survivors say they have faced unexpected backlash.

Berry said she received criticism from a Los Gatos High teacher she had emailed about a football player having allegedly committed a sexual assault. She said he called her accusations hurtful, inflammatory and overgeneralized.

“When I saw a teacher capitalize on my fear of being invalidated, it really hurt me,” Berry said.

The shocking incident was summarized on @metoolghs in a post that received more than 900 likes, in which the account also offered condolences to victims and conversational support for anyone in the community who needed it.

This arrest further stressed the need for immediate action, the student leaders said.

Citing statistics that one in four women are sexual assault victims and one in six men, Ryu said, “If sexual assault doesn’t feel like a personal issue to every single person in this community, it should. This isn’t just something that happens in Hollywood or across the country — it’s happening right here, right now.”

Ryu, Berry and the rest of the team are now vocal leaders of the push for policy action, which entails requiring a more structured investigation of sexual misconduct cases through implementing a detailed and public Title IX protocol, hiring victim advocates and bolstering sexual assault recovery resources for students, Berry said.

Nevertheless, many members of the administration and faculty from both Saratoga and Los Gatos High have openly recognized the severity of this issue and advocated in support of the movement and its goals.

According to Ryu, From Survivors For Survivors have had support from LGSUHSD Superintendent Dr. Michael Grove and LGHS physics teacher and swim coach Rachel Peters.

Community members have also shown their support for the movement through interaction with @metoolghs Instagram posts, which consistently garner several hundred likes and have largely supportive comment sections.

The work is far from finished for Berry and other leaders of the movement, but they are optimistic about the community’s attitude and the potential for change, she said.

“I think it’s really easy to feel like if you don’t talk about it, then it didn’t happen, but with something as pervasive and violating as sexual assault, it doesn’t go away,” Berry said. “I don’t expect or push for everyone to share their stories, but I encourage saying it out loud, even if it’s just to yourself.”

Berry advised survivors on coming to terms with their experiences.

“When you do say it, start with ‘I survived…’ or ‘I am a survivor of …’” she said. “When you say that, it acknowledges that this awful thing happened to you, but you are here and you are you despite that horrible thing. You are not that one story. Healing starts with acknowledging what caused the pain. It’s difficult and scary, but so worth it.”