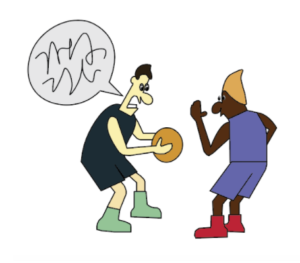 During a timeout during a volleyball game last spring, senior volleyball player Dylan Li was dissecting other teams’ lineups with his teammates when an opponent made it clear how little respect he had for Li’s game.

After hearing that, after every winning point, Li made sure to smile and shake his head at the player — sometimes even mouthing a few words — to let him know that “he couldn't stop me.”

Li and other student athletes aren’t immune to the occasional trash talking so often practiced in the professional leagues.

Although Li said he isn’t usually one to start it, “if somebody I'm playing against is doing bad, chiming in a comment about their performance can often get them to play even worse.”

He’s not alone in his rationale. Sports are competitive, and athletes often do everything they can to gain an edge over their opponents — even employing underhand tactics like trash talking.

Although the act of trash talking was only formally given a name in the 1990s, it had already been highly popularized by Olympic boxer Muhammed Ali starting from the 1960s.

With insults like “he’s too ugly to be world champion” and boasts like “I’m the king of the world,” Ali’s trash talking showed having a big mouth could come with big payoffs. (In his prime, Ali was the world’s best known athlete.)

Assistant principal Matthew Torrens said in his over 10 years at the school, he has witnessed a good amount of trash talking during sports games.

“Trash talking happens a lot, especially in football and basketball games,” Torrens said. “It could be people in the crowds, someone you know or a stranger on the field.”

In fact, Torrens said trash talking is “the worst” between SHS and Los Gatos because the students are usually familiar with each other. Between the two schools, a lot of the players grow up playing youth league sports together, so many of them are acquainted with each other.

“If you know the other players, it’s a lot tougher because they know everything about you,” Torrens said. “They’ll know that you work at Lucky’s or that your uncle’s in jail, so the trash talking is a lot rougher.”

Li, who avidly attended basketball games during the 2019-20 season, said the main role of the fans is to affect and change the momentum of the game.

In addition to providing “a huge energy boost” to players whenever the team makes a good play or when a call is made in their favor, the crowd is also effective in “disrupting the rhythm” of the other teams.

“If they focus their energy on responding to the crowd, it takes away from their ability to stay focused on the game,” Li said.

Some tactics players use include chanting loudly and calling out players on the opposing team by name after finding the team rosters online.  According to Li, shouting names makes it “almost impossible to focus.”

On the other hand, sophomore Irene Frazier, a three-sport athlete who has participated in football, wrestling and softball, said throughout her athletic journey, she hasn’t experienced or participated in many instances of trash talking.

“At Saratoga, I’ve found that we are very respectful towards the other teams we play,” Frazier said. “From my experience, we really don’t trash talk them unless we know some of the players or what the school is known for.”

Frazier said the closest thing to trash talking she witnessed was during the fall 2019 season when the football team was playing against Lynbrook High School.

“Some of our players viewed playing them as an [easy] win and said that we weren’t going to have to try because of how bad they were,” Frazier said. “They were right: we won.”

Despite these few victorious instances, Frazier said she believes trash talking “isn’t OK” and tries her best to avoid it.

Frazier’s perspective accords with the behavior rules for high school sports. Trash talking comes in direct violation of code 7 of the CCS Athlete Code of Conduct, which states that “[Players shouldn’t] engage in or allow trash-talking, taunting, boastful celebrations, or other actions that demean individuals or the sport.”

“If someone trash talks during a game, they would probably get in trouble for starting a fight,” Frazier said. “Then the player would have a risk of ejection, and if we don’t have enough players at that point, we risk a forfeit.”