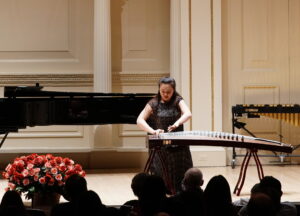 Ouch, not the best analogy to have my music compared to, especially since I’ve been studying it for 10 years with instructors both here and in China.

I play the Guzheng, the traditional Chinese harp. The Guzheng’s arched shape, calming pentatonic scale and 2,500 years of history is the emblem for elegance — or at least, that’s what it’s supposed to be. To me, it’s a struggle, because no aspect of performing the Guzheng is anywhere near elegant.

Whenever I perform, I am acting as an ambassador for traditional Chinese music. To do it any justice, the least I can do is to dress up. That, unfortunately, entails either an absurdly heavy western concert gown that leaves a trail of sparkles, or a traditional Chinese qipao with a ridiculously high slit on the side of the leg. Plus, there’s the task of making sure to not get a single scratch on the garment — my mom would strangle me if I ever ruined the expensive silk.

Even after I put on painful high heels and attempt to tame my hair into something more fitting for a proper Chinese lady, the real challenge still awaits: weightlifting.

My Guzheng is taller than I am and made of 22 pounds of fragile paulownia wood. Imagine heaving it up and down flights of stairs while dressed in concert attire, one hand holding the instrument and the other carrying two wooden stands to set the Guzheng on.

After setting up my Guzheng onstage and arguing with the sound crew until they agree to bend the microphone stand so that it gathers sounds from under the instrument, I also have to tell the stage manager over and over that I don’t need a music stand — it’s tradition to memorize solo pieces.

By then, flustered and with smudged makeup, I start to put on the plectrums, which are plastic “fingernails” similar to guitar picks but taped onto the musician’s fingers.

Taping the plectrums is a precise art, for having any inconsistencies would be like a piano player suddenly finding that their index finger has grown a quarter of an inch longer.

Thanking all the ancient Chinese deities I could think of that I haven’t fallen over yet as I walk on stage, I try not to imagine all the disasters that could happen during the performance.

More than once, a string has snapped while I was practicing, whipping the back of my hand and leaving a swollen red mark. Fortunately, that has not occurred during a performance — although a peg has fallen out.

The most embarrassed I’ve been during a performance was when I left my phone inside the tuning peg box.

I have always liked the space, hidden in the head of the instrument, in which I can store my tuner (and occasionally snacks) — that is, until my phone started ringing in the middle of a piece.

I continued playing out of muscle memory, stiff with horror as the familiar iPhone ringtone was picked up by the mic. Luckily, the audience knew too little about Guzheng to know I could hide a phone inside the instrument. They looked around in confusion and assumed it to be a sound system problem.

Too many times, Guzheng has condemned me to misery and sometimes physical injury, but for the foreseeable future, I’ll keep on plucking the silver strings in adoration of the elegance that lies in Guzheng’s music and its portrayal of my culture. In the meantime, I’ll entrust my iPhone to the double safety of “Do Not Disturb” and Airplane Mode.