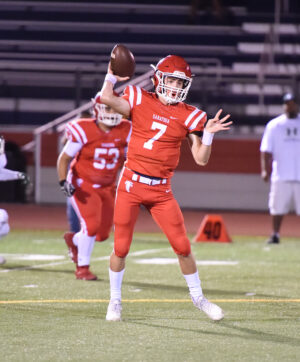 Senior wants to play in college but has no plans yet.

Senior Payton Stokes has started the first half of his senior campaign strong, further building his resume as a top Bay Area quarterback. This year, through his first seven games, Stokes has thrown for 2,149 yards, completing 65.4 percent of his passes. He is averaging 307.4 yards per game, and his efficient play has led to only three interceptions so far. This year, according to MaxPreps, Stokes has a top-notch 125.9 QB passer rating. These impressive stats tell only part of the story.

Stokes’ journey to being an elite quarterback began in eighth grade, when he joined his first Pop Warner team.

Playing on the quicker and more aggressive varsity level in his junior and senior years has presented many challenges for him like size differences, but he has adapted.

“I didn’t do too well in the beginning of my junior year, and at the last part of junior year I was catching on and doing well, so that turned into this year,” Stokes said.

This year has been even more successful for Stokes and the team, as the Falcons are currently 5-2 overall with a 2-1 league record. His success has gained him some local honors.

This August, the San Francisco Chronicle recently ranked Stokes as the eighth best quarterback in the Bay Area. In the past, this list has also included notable former Bay Area quarterbacks such as Tom Brady and Jared Goff.

Stokes has also drawn praise for his advanced knowledge of the game.

“Payton is running a college air raid scheme which is no different than the ones you see on TV on Saturdays, so his level of understanding a passing scheme is better than most,” head coach Tim Lugo said.

In order to keep his arm in shape and improve his accuracy to have maximal success in carrying out the air raid strategy, Stokes has attended throwing camps and trains with coaches in the offseason.

“Payton's talent on the field is obvious to everyone but it's his leadership and his ability to bring the team together that are his greatest attributes,” Lugo said. “He is big on the team bonding aspect and has the guys hang out at his house at the pool or will organize a trip to the beach.”

While college recruitment is on his radar, Stokes does not have any colleges in mind, and his main goal is to lead the football team to a CCS championship.  He is undersized for a D1 quarterback at 6 foot, but height is not gamebreaker it used to be with shorter quarterbacks such as 6-foot-tall Drew Brees being an all-time great.

During Saratoga’s Homecoming football game against Homestead High School on Sept. 27, Stokes threw for 423 yards and four touchdowns in a 56-35 win. Additionally, Stokes led the team to a victory at Monta Vista on Oct. 4, where he rushed for a 63 yard touchdown and passed for 260 yards in a 42-27 victory. Stokes hopes to continue his success in a game at home against Los Altos on Oct. 25.

“I hope to play football in college, but my main goal this year is to win and have fun,” Stokes said.