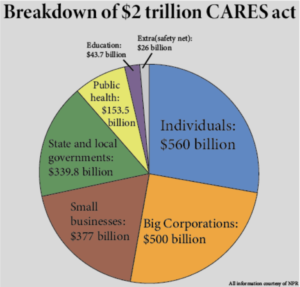 The recent $2 trillion stimulus plan is a step forward but lacks a lot of the necessary legislation.

On March 27, an unprecedented $2 trillion COVID-19 relief bill was signed by President Trump. The bill was aimed to address the economic concerns of four major groups: daily-wage workers, the health-care industry, small business and big businesses.

Ironically, while the federal government has refused to set up country-wide shelter-in-place orders and has weakly enforced recommended CDC action against COVID-19, the bill aimed to provide blanket economic help to a nation that varies extremely from one state to another in terms of policy. Although the bill contained some forward-thinking ideas, it failed to set up the necessary infrastructure and allocate money for those with more immediate needs; instead, it gave billions of dollars to businesses and real estate investors in the top 1 percent.

The first major portion of this act was to give $1,200 stimulus checks to Americans who are unemployed or have a salary that qualifies. According to an article written by Forbes, if the head of the household receives this check, their salary has to be less than $112,500. However, this number does not take into account the wide range of salaries across the country that accompany the swinging costs of living. For example, in the Bay Area, a salary of less than $117,000 is considered low-income according to an article by SFGate. This means that families who are equally in need of this check may not receive it.

On top of this, the stimulus check is based on tax filings from recent years, rather than the person’s current employment situation. This means that an employee who had a salary higher than $112,500 in the past year but then lost their job still cannot receive their stimulus check until they file new taxes. If a person filed their taxes for this year already, they might be completely ineligible for the check, regardless of their new job situation.

The stimulus check also does not take into account college students. Those who are over the age of 17 and are claimed as dependents on their parents are not eligible for getting a check, meaning that they will not receive the $1,200, and their parents will not receive an extra $500 on their check (as they would if the dependent was younger than 17).

The stimulus promised to hospitals and health-care providers comes with its own problems. Much of the money allocated for the health-care industry  is being used to navigate a complex network of private providers — of the $100 billion devoted, $26 billion is going to administrative oversight rather than to medical workers in dire need of personal protective equipment and life-saving equipment, according to Time magazine.

Few small businesses have received the money promised to them — a survey conducted April 6 by the National Federation of Independent Businesses concluded that only 4 percent of small businesses had their loan application approved, 1 percent denied and the rest got no response at all, said the Washington Post.

There has also not been enough money approved for the Small Business loan program. According to Politico, Senator Ben Cardin said the loan program could only provide $15,000 at most to businesses that applied, although most requested for $200,000. On about April 16, the Small Business administration ran out of the allocated loan money of $349 billion according to CNBC. In a following bill, $321 billion more was allocated, which small business owners could apply to starting April 27.

Other parties have unnecessarily gained tax breaks and loans. Most saliently, the bill involved tax breaks for real estate investors, which will benefit many wealthy investors in the top 1 percent, including President Trump and his son-in-law and senior adviser, Jared Kushner.

This provision lifts the restriction on the amount of money investors can claim in losses from real estate, allowing them to pay lower taxes on their profits from investments and other businesses. This rule applies retroactively to the last five years, and could result in $170 billion of tax breaks for big-time real estate investors, according to Vanity Fair.

According to a New York Times article, funds are granted to any small business who has fewer than 500 employees. This does not take into account the size of the franchise requesting these loans, only of each individual business. In this case, it means hotels like Marriott and Hilton would not qualify as corporations but would as individual hotels; this also then includes other small businesses, such as Trump and Kushner’s hotels.

Furthermore, Kushner is able to apply to get these funds for Trump’s business. While Democrats aimed to limit this by banning “the spouse, child, son-in-law or daughter-in-law” of officials from applying for funds, this provision only holds true if  the family-member owns 20 percent or more of the business. Since Kushner owns less than 20 percent of Trump’s businesses, their business could fly under the radar and allow them to gain extra federal funds.

Billions of dollars in the bill were unnecessarily spent and benefited people who were not in immediate danger. For example, a New York Times article said that $25 million had been endowed to the John F. Kennedy Center for the Performing Arts in Washington and $75 million each for the National Endowment for the Arts and the National Endowment for the Humanities. This was bribery money meant to win over those who supported these groups.

In addition, big corporations should not have received the largest amount of bailout money. Five hundred billion dollars went to airlines, cruises and other large corporations, with the only federal oversight being from the recently fired inspector general — meaning company executives could easily have a field day with this sudden cash inflow and leave their employees in the dust.

Rather than having an 880-page bill trying to cover such a wide range of beneficiaries, the Senate (and many of those addressed by the bill) would have done better to craft a much smaller bill that focused on health-care and stimulus checks for daily-wage families and individuals to begin with. This bill could have operated through pre-existing unemployment infrastructure such as Social Security, food stamps and other services and granted money to each family based on their area’s rates of outbreak, layoffs and average living costs.

For big businesses, the government should follow a path similar to how billionaire Warren Buffett saved Bank of America from going bankrupt: Buffett gave Bank of America $5 billion in exchange for warrants and stocks, said an article by Business Insider. This allowed Buffett to earn money from his investment, ultimately benefiting him and the company.

If the government takes a similar path, loaning money to big corporations like Boeing in exchange for warrants, both sides will gain in the long run once the virus is dealt with and the economy kicks into gear. The money that the government makes off of this loan will allow it to provide better funds for small businesses and gives it a stake in the company.

Granted, this package has positively impacted many and provided help for many who desperately need it. But it is not enough — the failed actions of this legislation to provide help to those who need it most speak louder than its promising words.