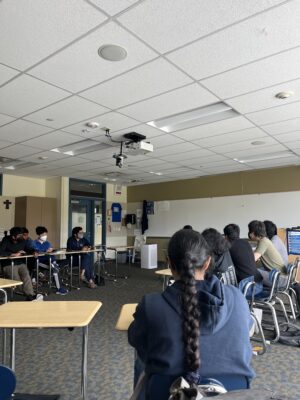 As the second semester begins to wrap up, many of the year’s largest STEM competitions have released their results. This semester, the science club hosted the F=ma physics test, USA Biology Olympiad (USABO), the U.S. National Chemistry Olympiad (USNCO) exams and the USA Physics Olympiad (USAPhO); math club hosted the United States of America (Junior) Mathematical Olympiad (USA(J)MO) competition; and both Quiz Bowl and Science Bowl buzzed their way into a third-place finish at their regional competitions.

On Feb. 3, 16 students took the USA Biology Olympiad (USABO) exam. Sophomores Advaith Avadhanam and Deeksha Palle and juniors Trevor Leung and Adam Xu qualified as semifinalists, meaning they are a part of the top 10% of test-takers nationally.

“It’s not easy [to qualify as a semifinalist], and I’m really proud of the accomplishment,” Avadhanam said. “I think that I learned a lot along the way, and it’s definitely a worthwhile investment if you’re interested in biology.”

Avadhanam started self-studying for the USABO competition his freshman year when he also qualified as a semifinalist. He said that this year, he mostly focused on reviewing material rather than learning new content.

The semifinal exam took place on March 31, and results are expected to be released on May 5.

Avadhanam also took the F=ma exam, which is an annual physics competition hosted by the American Association of Physics Teachers (AAPT) in February. Each year, roughly 6.7% of students who take the test qualify for the USA Physics Olympiad (USAPhO).  Of the 30 students who took the exam, nine qualified to participate in the USAPhO, the next, invitational, level.

Similar to the USABO exam, Avadhanam also started self-studying physics in his freshman year, when he also qualified for the USAPhO.

“I feel very similarly [about the USAPhO as the USABO]: The test definitely wasn’t easy, but it was a very valuable experience if you’re interested in physics,” Avadhanam said. “You learn a lot and it’s also a bit of fun.”

Both the USAMO and USAJMO consist of six questions solved over the course of nine hours. The test is split into two days: Students have four-and-a-half hours to solve three questions each day. Of the students who take the American Invitational Mathematics Examination (AIME), roughly 500 students are eligible to take either the USAMO or USAJMO.

Qualification for these exams depends on a student’s index, which is determined by their scores on both the AIME and American Math Competition (AMC) 10 — for students in 10th grade or below — or AMC 12 exams  — for students in 12th grade or below. If their index is above a certain cutoff, that student qualifies for the USAJMO or USAMO, depending on whether they took the AMC 10 or AMC 12 exam, respectively.

The students who qualified for the USAMO were sophomore Advaith Avadhanam, juniors Nilay Mishra and Anthony Wang and senior Preston Fu.

Avadhanam started studying for competition math in sixth grade after he did well on the AMC 8, and he studies throughout the year at an outside institution called Random Math.

“From doing decently on the AMC 8 to qualifying for USAMO last year and this year, it’s been a long ride,” Avadhanam said. “I learned lots of math and had lots of fun.”

​​The Science Bowl A team placed third out of 30 teams at the Stanford Linear Accelerator Center (SLAC) Regional Science Bowl tournament on Feb. 12.

The B Team — consisting of freshmen Kirby Fung and Skyler Mao, sophomores Nikhil Mathihalli and Parav Manney and senior Ethan Zuo — made it past the preliminaries but was eliminated in the third round of the tournament, ultimately finishing in 15th place.

According to Mishra, the A team still performed well despite losing their top teammate from last year, 2021 alumnus Rohan Kumar, to graduation.

Like last year, the rules for Science Bowl were significantly different than a regular year to accommodate for difficulties with running the tournament over Zoom. Instead of the traditional head-to-head buzzer contests where competitors would race to answer questions on various STEM subjects before the other team, the competition had longer time limits and no direct competition, meaning that there was a greater emphasis on knowledge rather than speed.

For many on the team, the new rules were tough to get used to. For example, the team had to discuss potential answers to all questions but also have someone raise their hand before time ran out, requiring additional coordination to maximize their points.

Nonetheless, Mishra believes the team’s performance indicates that it has a strong shot to make it to nationals next year.

“Our team has been intensively practicing together for many months now, and we’re excited to see how we can improve and win in the future,” he said.

The Quiz Bowl sent one competitive and two standard division teams to the fourth California Cup tournament on March 27 at Bellarmine High — the competitive team barely clung to a victory.

According to junior Anthony Wang, the biggest competitor the team faced was a team called Sagittarius from Archbishop Mitty High School high school, who the team had lost against in the preliminary rounds. However, Sagittarius lost against another team, meaning that Sagittarius and the SHS team were tied going into the finals.

Wang believes that in-person events like these competitions improve the team’s performance.

“It’s definitely more immersive [in person], and when you’re buzzing, it’s much easier to give nonverbal cues to teammates,” Wang said. “It feels more competitive because you can actually see your opponent.”

Similarly, freshman Agastya Vitaldevara, who has not participated in buzzer-base competitions prior this year, believes the new in-person format benefits competitions despite its learning curve.

“It’s a lot more fun in person, but I think there’s an adjustment period where you have to get used to [pressing a physical buzzer],” Vitaldevara said. “A huge difference is also the vibe because you’re able to talk to your competitors and have fun as a team and meet a lot of smart people.”

The team also hopes to do well in the High School National Championship Tournament, which will be held later this year in Atlanta, Georgia, on May 27 to 29. Last year, the team placed 19th, and Wang hopes that the team can improve this year.

“There are [roughly 200] teams at the competition, and you get randomly assigned who to play, so there’s a bit of luck involved,” Wang said. “I hope to improve our results to place in the top ten, but everything after that is dependent on luck.”