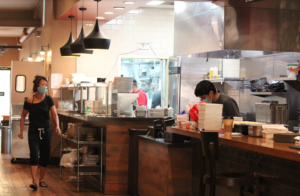 Photo by Selina Chen
Interior view of Big Basin Burger Bar in the early days of the pandemic, captured by the writer during her first time reporting for the Falcon

Jet-lagged and still struggling to digest the idea of immigration, 11-year-old me wandered aimlessly through the half-assembled pieces of IKEA furniture strewn about haphazardly in a strange apartment in a strange land.

The issue on the table: the need for food. After a 12-hour flight from China and the hassle of pushing enormous cardboard boxes through a crowded airport, my family was famished. We’d finally arrived at the city we now call home, but home was still unknown.

My family consulted Google Maps and pointed to the closest eatery possible: Big Basin Burger Bar. After all, ordering a burger is among the easiest things on the planet, especially with our prior McDonald’s and KFC experience. What could go wrong?

We entered the dimly-lit bar, followed the host to a table and gazed down at our menus …

With classroom-learned English — memorized formal vocabulary and stilted grammar for the sole purpose of test-taking — we had no chance of understanding what in the world “French Moo,” “Wild Thing” or “BLT Gobble” meant.

As the most fluent English speaker, my father stepped up and figured out a combination of dishes he deemed suitable, which he then relayed to a waiter in a conversation I had no chance of comprehending.

Soon, peculiar burgers — very much different from the fast food I was accustomed to — appeared on the table. What was more peculiar was the flavor. Our taste buds, unused to the explosion of foreign flavors we could not name, protested hesitantly, half-disapproving and half-confused.

Recollections and emotions work in strange, unpredictable ways. Although I absolutely did not enjoy dining at Big Basin that night, somehow it stayed in the creases of my memory with a fond tint — along with the countless other blunders of starting one’s life anew.

Fast forward five years: It was my first week of the fabled junior year and my first time reporting for The Falcon as a junior  beginning reporter with no Journalism 1 experience. A single-byline news story on local businesses did not sound encouraging.

With trepidation, I embarked on a trip through Saratoga downtown, over-prepared with my camera, spare lens, hand sanitizer, phone, a list of questions, notepad, pen and a physical voice recorder I nicked from my dad. I was way out of my depth.

I trudged up to a waiter and asked whether I could speak with the manager, and to my surprise, owner Janice Albright readily agreed. She spoke of loans, confusing COVID-19 mandates and the reality that a drop in sales had forced her to cut employees and supplies, explaining in detail any concepts I didn’t fully understand. Her warm approachable personality allowed me to relax into the interview and ultimately write a story I was proud of.

The pair of first-time experiences have established a sentimental place for Big Basin in my heart. Today, I’ve become used to the rich flavors that comprise Big Basin’s burgers, frequenting the establishment for delicious meals — and to reminisce about the journeys I began there.