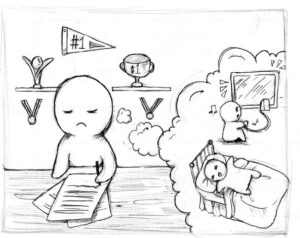 To do work or to do nothing.

Competition is the name of the game. It’s everywhere, from sports to the stock market. It’s teams competing for a trophy; it’s companies competing for market dominance. Without competition, little would get accomplished in the real world. Progress would cease.

Saratoga High, of course, often receives criticism for having an overly competitive environment that leads to excessive student stress.  But this academically minded culture has many benefits as long as students can manage not to be overwhelmed by it.

Clearly the goal for many students here is to gain admission to what they (or their parents) believe is a good college. The admission process is essentially a massive competition between the 3 million high school students who graduate from U.S. high schools each year. At UCLA, for instance, only 16,020 students were accepted from 113,748 applicants last spring. This desire to be admitted pushes students to pursue interests, awards, programs and leadership positions they might not have considered otherwise.

The academic culture at SHS is a localized version of this competition. The only difference is that instead of competing against 3.5 million people, students compete against around 300 others in their graduating class.

For instance, a student who has a low grade relative to his peers is likely to try harder to raise that grade than if he had less competition. As long as teachers have ways of supporting students that feel they are underachieving, students will not become discouraged and work harder to reach the same level as their classmates. As a rule, students are more likely to emulate high-achieving peers and become much more knowledgeable in fields such as calculus, chemistry and biology than in less competitive environments.

The benefits of this so-called toxic academic competition are not limited to grades. A student who has only a few extracurricular activities will likely take part in more activities in order to keep pace with his friends. In the long run, this could lead to a student discovering a new passion or simply spending his or her free time more wisely.

Many students at SHS double up in sciences during their junior and senior years, participate in academic competitions and take numerous AP classes in order to compete with their peers. Students spend more time studying for all these things, simply because they want to perform at or above the level of their friends.

It is because of the environment that SHS performs so well in academic competitions. We have mathletes who place in the top 10 of the nation and a Quiz Bowl team that ranks in the top 15. We consistently have students who go to colleges such as Stanford and MIT. Clearly, academic competition helps stimulate interest in these activities and allows students to reach their potential.

Having said all this, I acknowledge that academic competition also increases stress. However, students are going to have to learn how to deal with stress at one point or another. Forcing students to live in a competitive environment not only causes them to take on new challenges, but it also teaches them important skills such as time management and helps them develop important character traits such as resilience and discipline.

These skills will be especially pertinent in college. The transition from high school to college is rough, with rigor increasing substantially and competition increasing even more. Students who do well at less competitive high schools and make it to a top college often are  less able to cope with that college’s academic rigor. However, Saratoga’s competitive atmosphere is the perfect preparatory environment, forcing students to overcome academic barriers to achieve at the same level as their peers.

This kind of competition can be analogized to sports. Sports would not be fun without having other teams to compete against. Ultimately, having strong teams to play against forces teams to practice harder in order to stand a chance at winning. Sports are stressful no doubt, but this stress is what makes them rewarding.

Challenges are what make us progress as people. Ultimately, Saratoga’s academic environment is simply another challenge. Not only does it make us do things we never would have by ourselves, but it also makes us better equipped to deal with the world around us. As long as we take our failures in stride and use them as lessons to improve, the competitive environment we live in will make us better as a whole.