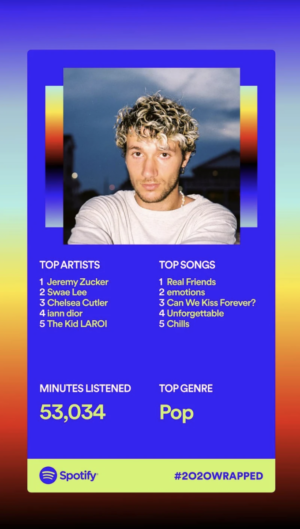 We’re finally into the new year, and Spotify recently blessed us with 2020’s version of Spotify Wrapped, the app’s summary of each individual’s music taste in the past year.

But Spotify Wrapped doesn’t actually represent the whole year; it’s released on Dec. 1, meaning that there’s still a whole month of festive music to look forward to. It’s almost like December just never crossed the developers’ minds, making statistics like listening minutes inaccurate for an entire year’s worth of listening.

Some of the “top songs” also seem a bit off. A song that had only really lasted two months in my playlist somehow snuck into my top five – weird.

I did some researching on statsforspotify.com, and as I expected, that exact song was nowhere to be seen in my top tracks of the last six months. Surely, a song that I’d overplayed so long ago for a small time frame shouldn’t be included into my top songs of the year.

Don’t get me wrong — I love the idea of Spotify Wrapped, and it’s a great recap of the year’s music. Still, some of the execution isn’t quite there yet.

Understandably, it’s hard to analyze statistics for listening through such a long period of time, but for me, what makes a song stand out is its listenability without sounding “overplayed.” Consistency is key with a “top” song, as continuous streaming shows that I’ll never get tired of it.

As such, top tracks on Spotify Wrapped should ideally be based on both streaming frequency and how many different days the song was played. A song truly worthy of the No. 1 spot on my list should stand out to me for the whole year, not just a month or two.

This brings up to another point: how is streaming frequency actually calculated? It seems as if playing several seconds of a song and then immediately skipping it still counts as a stream, as numerous songs that have been left to rot in my playlists reappear in my Spotify Wrapped.

Streaming frequency is such an integral part of Spotify Wrapped, and it’s one of the only quantitative measurements that can dictate your top songs or even your top artists.

Still, deciding a top artist is much more complicated than just a single song. Top artists shouldn’t be based purely on streams; otherwise, one-hit-wonders would be flooding the top artist pages and artists with one overplayed song would sky-rocket up the rankings.

What really makes a No. 1 artist is how many of his or her songs I’ve listened to and their respective streaming frequencies. Spotify should take into account how many of an artist’s songs a user has actually listened to consistently, as well as how often they’ve listened to that artist within the whole year.

What would also be helpful is a month-by-month analysis of my listening to explore how my music taste developed throughout the year. A whole year is just too long for only five tracks and artists to make the cut, and a timeline going through the months would be a great addition.

For those who scratched the surface of many different genres especially, a timeline would be a perfect music taste journey for the end of the year. Oftentimes, my favorite genres bar graph is just a cluster of random genres out of left field, and this doesn’t provide a true perspective for what type of music I listen to.

2020’s Spotify Wrapped left a lot to be desired, but then again, it’s probably impossible for a machine to truly understand the complexity of your mind and beliefs. And that’s something we should all be thankful for.