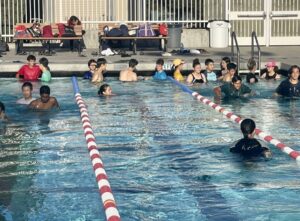 Photo by Courtesy of Elizabeth Stoiber
Cross country runners practiced treading in the pool when temperatures soared above 90 on Aug. 19.

Permalink
Water polo and cross country continued practicing throughout the week, with the latter making significant changes to its practices. Other fall sports like volleyball and field hockey returned to practice on Sept. 7.

During the week of Sept. 5, a historically severe heat wave baked the Western U.S. Temperatures in Saratoga soared above 100 degrees Fahrenheit, posing a danger for student-athletes who typically practice in the afternoons when temperatures are at their highest.

Superintendent Bill Sanderson issued a notice canceling all sports practices on Sept. 6, save for water polo and cross country, which changed its workout time to the morning. The following day, Sanderson sent a district-wide email update allowing practices and games to continue under the recommendation that coaches shortened practices, continuously monitored students and provided “ample breaks.”

While most fall sports — including girls’ volleyball and field hockey — took a week-long hiatus before returning to practice on Sept. 7, other sports like cross country managed to work around the heat, continuing practice every day of the week.

Cross country moved all practices from the usual 4 to 6 p.m. to 6:45 to 7:45 a.m., which is typical of what the team has done in previous heat waves, according to head coach Kathy Tippetts.

“The fitness levels of athletes go down if they miss a week of practice, but that is especially true for runners,” Tippetts said. “Returning to practice after not running for a week can also increase the risk of injuries.”

Tippetts said the workouts largely stayed the same as the usual 5-mile run for varsity and 4-mile run for JV, despite the shift to morning practices. To give ample time to transition from practice to class, athletes practiced on the track instead of running around the city as they typically do in usual practices. Weekend runs mostly stayed the same: Athletes either ran a 5- to 7-mile course by themselves or attended an early 7 a.m. group run at Sanborn County Park.

The team also ran in the pool during hotter days. On Aug. 19, when temperatures reached above 90, the runners practiced a series of quick treading and kicking exercises in the pool. The treading exercises involved moving the arms and legs as quickly as possible to stay afloat and were designed to help athletes incorporate a more efficient running form. Tippetts said the goal of the exercise was teaching runners to have quicker strides, an essential skill for gaining speed. Runners also used kickboards to assist them in kicking exercises, which aimed to build calf and thigh strength.

“Practicing in harsher conditions will really help when we start running in the harder races,” Tippetts said. “I love that cross country was able to continue practicing; everyone improved a lot this week.”

“I’m glad I get to rest after school now,” Gho said. “Even though I have less time to eat breakfast and do homework in the morning, I think our coaches and captains made the right decision to continue practicing during the heat wave.”

Indoor sports such as volleyball returned to their usual after-school practices on Sept. 7. However, the school’s gyms are not equipped with heating, ventilation and air conditioning (HVAC) units. As a result, players had to make do with the gym’s two large fans, which senior team captain Noor Khan called ineffective.

As temperatures soared during the home game against The King’s Academy on Sept. 7, although the Falcons won all three sets of the game, Khan noted that the overall morale of the team was down.

“Both teams could feel the heat, and we tried to play through it as best we could; the captains tried to pick up everyone’s spirits,” Khan said. “It wasn’t anything crazy, just a bit of an inconvenience.”

While Khan said varsity head coach Thomas Ching mostly follows the district’s recommendations, she believes the game on Sept. 7 should have been canceled.

“I respect the district’s decision and it’s really hard to cancel a game when it affects everyone else in the season, but I think athletes’ health should be handled with more caution and care,” Khan said. “The gym doesn’t have air conditioning and the fans don’t help much; we play so much worse when there’s heat and humidity. We might as well just not have a game — the team felt like we were walking into a losing game.”

Other outdoor sports, like field hockey, were impacted similarly. Field hockey practices were adjusted to fit the district’s recommendations.

Varsity player junior Emily Hung said that practices were pushed back from 4 to 6 p.m. to 6 to 8 p.m., when — although temperatures remained well in the 90s — it was less sunny. Additionally, the team took more water breaks and practiced less sprinting, though the length of practices remained roughly the same.

“Practicing during a heat wave was definitely challenging, both mentally and physically. We got fatigued much quicker, and it was much easier to get discouraged from what looked like a lack of progress during the practice,” Hung said. “However, I do think it’s important for all athletes to practice in 90+ degree weather. It may be just as hot on game days, and learning to play in those conditions will be crucial.”

Football, which usually practices for 2 to 2.5 hours on the turf in the afternoon each day, saw more changes and cancellations in their usual practice schedule during the heatwave.

Senior running back Paolo Navarro said that practice resumed on Wednesday and was changed to a less intensive one-hour practice. Practice was canceled the following day as temperatures soared back over 100 degrees. On Friday, Navarro said practice was canceled for JV but was moved from the afternoon to 6-7:45 a.m. in the morning for varsity; both teams were preparing for their home games against Harbor the next day, when temperatures cooled down to the low 80s.

“The heatwave is more of an inconvenience rather than an obstacle, but I’m glad we were able to work around it by moving practice to the morning,” Navarro said. “It shows that Saratoga coaches are aware of the dangers of practicing in triple digits and made a good decision to either cancel practices or move them into the morning.”