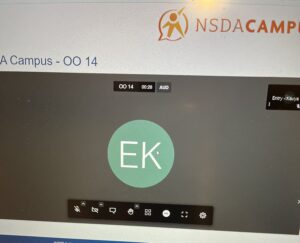 The NSDA Campus competition room during the CFL 2 tournament on Dec. 5

Junior debate captain Anushka Sankaran stared at the tiny black boxes on her screen in September 2021 taking notes on what her opponent said during her debate round in public forum. Despite having gone back to in-person learning for school, all of the speech and debate competitions she participated in so far this year have been virtual.

Speech and debaters said there are pros and cons to both in-person and online Zoom competitions.

“We haven’t had in-person competitions since my freshman year, but it was a lot better than online,” Sankaran said. “Online, the judges are always parents who always turn their cameras off.”

The online competitions can sometimes take away from the in-person competition experience, Sankaran added. In-person debates are more professional, since participants compete face-to-face and rules require all participants to dress up.

“For in-person competitions, you’re a lot more hyped, and competing with your partners is a lot more fun, despite the stress,” Sankaran said.

However, online competitions tend to be less intimidating because competitors can sit at home in pajamas in between rounds, Sankaran said.

“Online competitions are a lot faster because you only go to two or three rounds a day,” Agarwal said. “This is vastly different from in-person competitions, which take up the entire day, even when you aren’t competing the entire time.”

However, Agarwal added that she felt significantly less motivation to go to virtual tournaments since these online competitions were less interesting and did not seem as important as in-person competitions.

Xavier Liu, a board member of Coast Forensics League (CFL), the league Saratoga competes in, and a speech and debate coach at Bellarmine High School, said that safety measures and concerns related to COVID-19 are the main reason for not returning to in-person tournaments.

“Liability is a big factor. Suppose a parent or student is not vaccinated, there is a risk of the virus spreading even with masks,” he said.

At this point, the only school that could potentially host an in-person competition is Milpitas High School because of their large campus, but there are more complications to consider.

“When a partnership of students compete in Duo Interpretation, would they be six feet apart? Does there need to be six feet between the judge and each contestant? Concerns like this come into question with the board who don’t have an answer at the moment,” Liu said.

For efficiency and safety, he said that the clear choice is to stick to the online competition format.

Liu said a downside of online competitions is how tedious the process is. He has had many experiences during which rounds were delayed due to judges and competitors entering the wrong meeting rooms.

These problems have continued into the rounds as well. Often the judges will have their cameras off, or display no emotion to the ongoing speeches. This makes it difficult for the competitors who are seeking the judges’ reactions to their speech, especially in interpretation competitions. It becomes frustrating for the contestant who is trying to get a sense of response, Liu said.

However, Liu and the other CFL board members are planning to meet this month to discuss the return of in-person competitions. They plan to talk about hosting and accommodations, judges, competition formats and more.

“Each program and coach has very personal and different feelings about coming back,” Liu said. “There are a lot of pros and cons on staying online versus coming back. So, it all depends on what the COVID-19 situation looks like in the near future as well as what is most accommodating for as many people as possible.”