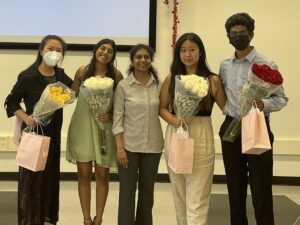 Donning blazers, shirts and dresses, students and parents filed into the cafeteria on May 17 in formal attire for the speech and debate team’s banquet and senior night.

The team celebrated this year’s successes, achieved at 35 tournaments with 148 total entries and 34 awards. At states, freshman orator Timothy Leung placed 7th, and freshman debaters Ashish Goswami and Leo Jia advanced to quarterfinals. At the Tournament of Champions, Leung advanced to quarterfinals in dramatic interpretation, and junior Arnav Garg advanced to double octofinals in Lincoln-Douglas debate at the Tournament of Champions.

Additionally, Leung qualified for nationals as the second-place seed in the California Central Coast district and will compete in Kentucky in June.

“I was really nervous, so when I found out that I qualified, it was honestly amazing,” Leung said. “As a freshman, this is going to be my first nationals, and I’m really excited it’s going to be in-person.”

Leung, who will be a speech captain next year, plans to have more peer-to-peer coaching to help others and themselves understand what they need to improve on. He also plans to help build the team into “one big family that supports each other during tournaments.”

“I feel the sense of urgency and big responsibility to continue supporting and leading the booster team, as I believe speech and debate is a great learning opportunity for students to reap life-long benefits,” Shi said. “I hope the S&D club will provide a unique platform to connect, support and inspire students who are committed to empowering themselves and influencing the people around them through speech and debate.”

“I feel I’ve put my all into these four years and I will genuinely miss all the connections I’ve made here,” Potluri said.

However, the banquet was not the only recent celebration: Head coach Steve Clemmons walked into speech and debate practice on May 3 to the Student Center decked out in balloons, with cakes frosted in his honor — the team was celebrating his induction to the California High School Speech Association (CHSSA) Hall of Fame, the highest honor for California coaches. Currently, there are about 70 coaches in the CHSSA Hall of Fame. He is one of only two Black coaches to be so honored.

After 12 years coaching at Saratoga, Clemmons attributes his success to the hard work of students.

“This isn’t a speech to you, but a speech about you,” he said to the club. “None of it would be possible without the hard work of Saratoga students.”