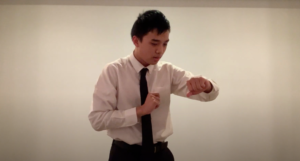 The team is focusing on resolving this year’s club issues and continuing their successes.

Freshman Cameron Nguyen’s phone lit up with a notification on the evening of April 24, the final night of the California High School Speech Association (CHSSA) State Championship — Nguyen had advanced to the semifinals.

After thinking he would be eliminated following three days of asynchronous competition, the news was a surprise. At first, Nguyen thought he had been pranked — he couldn’t believe he had made it to semifinals, since the state championship was one of the most nerve-wracking tournaments he’d competed in — but the wave of doubt was soon replaced by excitement and curiosity.

Nguyen’s success at the tournament is one of the best results of a challenging and rewarding season for the speech and debate team.

The CHSSA State Championship is a part of the speech and debate postseason (a period after the main season ends in mid-March). Major postseason tournaments require qualifications for entry; depending on the tournament, students can qualify by accumulating two bids (which can be won at competitive invitational tournaments) or by ranking high at a qualifier tournament.

In the tournament, which took place from April 19-25, Nguyen ended up placing 13th, Chen fourth and Yeh 18th. Additionally, Yeh entered in Poetry as a supplemental event and ranked 9th.

Chen, Yeh and Rallabandi attended the National Individual Events Tournament of Champions from May 5-8, where Rallabandi advanced to the octafinals.

With the closure of posteason, the speech and debate year has drawn to an end, with the exception of the National Speech and Debate Tournament in June in which Chen, Yeh and Rallabandi will compete in their respective events.

Under normal circumstances, competitors would have traveled across the country to compete at these tournaments; however, this year’s speech and debate season operated completely virtually, and competitors had to transition from speaking in front of an audience to fishing for an audience-like connection in the green dot at the top of their screen.

Virtual competitions forced competitors to abandon their feel of the activity, and, in essence, relearn it.

“A huge issue for me this year was the loneliness attached to debating virtually,” Garg said. “The ability to have people to talk to instead of being alone in my room makes debate a lot more exciting for me.”

Although Garg’s event, Lincoln-Douglas (LD) debate, is a one-person event, it is crucial to break down debates with your opponents in-person afterwards — another element of tournaments stripped from online competition, he said. This retrospection allows for improvement during the course of the tournament.

Coach Erick Rector agreed, saying, “Our team is pretty darn resilient. I know it’s not easy. It takes a lot of intrinsic motivation to compete at the level that they have, and they’ve done an excellent job with it, especially considering the number of hours it takes to transition to the online platform and prepare for tournaments.”

Students who are new to speech and debate this year, including Nguyen, have not had the opportunity to compete in-person and experience the lively, sometimes nerve-wracking tournament atmosphere. In-person tournaments aren’t the only elements members were lacking this year: The team has also missed out on in-person bonding. Along with the remote season, the team’s numbers have significantly decreased.

Last year, the club boasted 90 registered members. This year, they have 60, though even fewer have participated in tournaments, vice president Harshini Velchamy said. “Lots of people dropped speech and debate because competing online just really wasn’t for them,” Velchamy said.

The dropping numbers made it harder for the team’s LD debaters to perform at their usual caliber, according to Garg, as their small program — initially three people — dwindled throughout the season until Garg was the only active member remaining.

The debate team dynamic has been anything but typical. Velchamy also saw fewer upperclassmen mentoring for younger students, so to address this issue and increase participation next year, the team plans to implement an upperclassmen-underclassmen mentorship system.

Decreased participation has also caused club funds to plummet, adding to an already difficult trend. Some participants haven’t ponied up the suggested $800 donation, contributing to a deficit. This year, Rector successfully implemented a new deposit system to ensure that additional tournament fees do not go unpaid.

The deposit system and various fundraisers worked together to create the team’s approach in raising money. Fundraisers included a fruit sale, multiple Chipotle and Panda Express fundraisers and the Hyde Invitational, a tournament fundraiser.

Nevertheless, the team persisted and preserved morale as much as possible. From virtual bonding activities to hyping one another up in group chats, the team attempted to mimic the unity of in-person speech and debate whenever possible, Velchamy said.

“We’ve been thrown a lot of curveballs because of this pandemic, and I think that the people that really wanted to go after it this year have done that. I think it’s pretty astonishing how well we’ve done,” Rector said. “With what we’re given, we did a good job. Next year, I’m looking forward to continuing that success.”