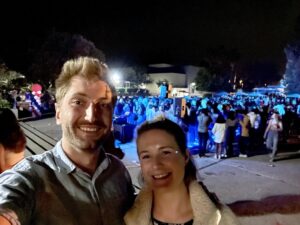 spanish
Although she has not determined which school she will be teaching at next, she hopes to live and teach in the same community.

Spanish 2 and 3 teacher Allison Dermont will leave the school after two years to teach at a different school. She has not determined which school she will teach at next, but it will be located closer to where she lives in San Francisco. Dermont said she has enjoyed teaching at the school, especially because of the students and supportive staff, but that the long commute to and from the school is no longer sustainable.

“Leaving Saratoga High was an extremely difficult decision involving a very detailed pro-con list. I thought about it for months,” Dermont said. “I realized one of the main reasons I didn’t want to leave was that I would feel a lot of guilt leaving the school after only being here for two years. However, I decided that I couldn’t let that guilt stop me from making the right decision for myself.”

When she started working at the school in 2020, she lived in the South Bay, just a few miles away from the school. But during the 2020-21 remote learning school year, she was able to take a 6-month lease in an apartment in San Francisco. During that time, she met her now-fiance and they will live in the city because of his work there.

When school returned to an in-person setting for the 2021-22 school year, she had to make a 2-hour round trip commute to and from the school. Though she loves the school, she said the commute has proven too overwhelming.

“After a year of doing this commute, I have realized that the commute was not sustainable for me in the long term,” Dermont said. “I feel stretched thin between work and home and I prefer to look for a job in my own community here in San Francisco.”

She enjoyed the school’s community because she felt the administration, world language department teachers and especially the students have been supportive.

“My students are hilarious, fun, goofy, silly, and I love when they speak in Spanish,” she said. “I will really miss the students I have gotten to know in the past two years but I will definitely come back for their graduations,” she said.