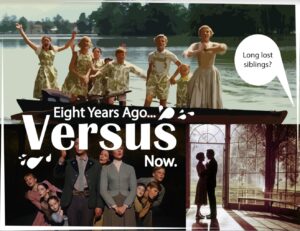 “Raindrops on roses and whiskers on kittens. Bright copper kettles and warm woolen mittens. Brown paper packages tied up with strings. These are a few of my favorite things.”

Whether or not you are a musical fanatic, you have probably heard these lyrics while watching the timeless classic, the 1965 film “Sound of Music” starring Julie Andrews and Christopher Plummer, when you were a kid.

If so, your initial impression of the film may not have been far off from mine at age 7: an old and boring movie with a big mean captain, a babysitter and a bunch of kids singing “Do, a deer, a female deer. Re, a drop of golden sun …”

Still, my sadness over famed actor Christopher Plummer’s death at age 91 a little over a month ago prompted me to rewatch the entire film. To my surprise, the musical I watched at age 15 was significantly different — and better — than the one I remember from half a lifetime ago.

From my elementary school self’s initial impression of the movie, the first thing I recall was an eccentric woman named Maria singing on top of the mountain about hills and music, followed by a group of nuns complaining about her full-on opera style. Most of the beginning was a blur until Maria got sent away to take care of the children of Captain Von Trapp, a rude and intimidating man with a whistle who forced his children to stand like soldiers. In fact, he went so far as to ridicule Maria when she sits on a pinecone. (Note: This image never left my mind.)

Afterwards, I remember meeting all seven Von Trapp children, where my interest piqued because I thought they were the coolest kids ever. There were many scenes related to Maria, Captain Von Trapp and the “love” between Liesel, the oldest Von Trapp child, and the soon-to-be Nazi Rolf, but the seven singing children who climbed trees, splashed in lakes and yodeled with puppets made greater impressions. (Note: When I was in second grade, I refused to accept that these weren’t my long lost siblings that I was going to run away with one day.)

The two-hour movie passed quickly after Maria and Captain Von Trapp fell in love, married and then the family escaped happily into the hills. I had no memory whatsoever of Liesel and Rolf’s break up, nor did I understand the reason behind the family’s escape.

That said, my first impression was that although some scenes grabbed my attention, most of the film flew right over my head, especially because I was more of a Magic School Bus and Barbie kind of girl rather than an old-timey film girl.

A clearer grasp of events and their significance

Watching it as a teenager, the beginning of “The Sound of Music” was the same scene of Maria singing and the nuns complaining, although I could now appreciate their vocal talents. The most captivating part of the movie, however, didn’t come until Maria met Captain Von Trapp due to their electric chemistry. On the contrary, it was obvious that the love between Liesel and Rolf was nothing more than a “typical Hollywood romance” that would never work out.

Maria and the singing children were still fun to watch, although their childish appeal lessened with age. The component of the film that I grew to understand the most was the history behind the Nazi occupation of Salzburg, Austria.

I also couldn’t believe that Captain Von Trapp’s rendition of “Edelweiss” sailed over my head in second grade, as it was the saddest part of the film. After being told that he had no choice but to enlist in the Nazi army, Von Trapp decided to plan an escape rather than fight for Hitler. The song not only encompassed Von Trapp’s farewell to his Austrian homeland, but it also foreshadowed the ultimate betrayal brainwashed Rolf would commit when he revealed the hiding location of the Von Trapp family to the Nazis.

Rather than my primary takeaway being the same childish pinecone scene, I found myself contemplating the tragic backstory behind Captain Von Trapp’s failure to deal with the loss of his former lover and the healing he experiences with Maria.

“The Sound of Music” became an entirely different film than the one I recalled watching as a child because I now understand the historical context behind the Nazi occupation in the late 1930s. For once, I felt a real connection to the horrors of the Nazi occupation, rather than it being nothing more than a distant chapter from my history textbook.

I was moved by the deep sadness that Von Trapp expressed in “Edelweiss,” despite his shortcomings throughout the film, and touched by the bravery of the Von Trapp family when they decided to risk their lives to escape rather than take part in the Nazi’s twisted idealogy and genocides.

I have yet to know what my adult impression of “The Sound of Music” will be. Maybe the singing children will remind me of my future sons, daughters, nieces or nephews. Maybe I’ll view the backstory of Von Trapp and Maria in yet a different light.

Nevertheless, my ultimate takeaway is that I will definitely take the time to sit down and rewatch the film when I’m older. After all, as you grow up and form new outlooks on life, it’s like watching a new film entirely.