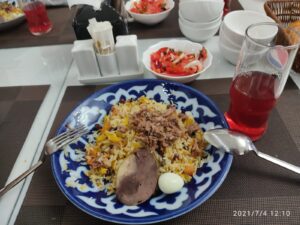 Photo by Sofiya Malko
A meal eaten with horse meat, one of Kazakhstan’s most popular dish ingredients.

Permalink
While Kazakh cuisine is not very well-known, its unique flavors and health benefits are worth learning about.

To be sure, Kazakhstan, a country with a population of 19 million and is located in Central Asia and borders Russia, China and the Caspian Sea, is not as famous as other tourist go-tos like Hawaii or Paris. Still, its traditional foods are well-developed and worth trying, according to sophomore Sofiya Malko, who lived in Kazakhstan for 11 years along with her parents and grandparents who had lived there for generations.

Kazakhstan’s national food is beshbarmak, a dish made of horse meat and onions. In Kazakhstan, horse meat is a valued tradition. It served as food for ancient Kazakh nomads and according to The Guardian, is actually much healthier than beef because of its low fat and high protein.

“Inside, there are things that are kind of like noodles, but they’re actually much more delicious than regular noodles,” Malko said.

Another example of a dish that contains horse meat is qarta, a dish made of boiled and pan-fried horse rectum. It is usually served as a side dish, but is iconic nonetheless because of its unique and layered texture.

One relatively healthy dish that is popular in Kazakhstan is kumys, a white soup made of fermented mare’s milk. While Malko isn’t a fan of its taste, she acknowledges the benefits that kumys brings with respect to health. Not only is it also low in fat, but it also is high in vitamin C. In addition to this, it has been part of Turkish culture since the ancient traditions started thousands of years ago.

“Depending on the family who makes it and how you make it, it tastes different,” Malko said. “This gives a special experience to both the family that makes it and to those who try it.”

Although these are only some of the cooked dishes that came from Kazakhstan, it is actually home to much more than just Kazakh cuisine. In fact, apples were actually originally grown in Kazakhstan before being brought to the Americas in the 16th century.

“We have a lot of apples in Kazakhstan, but the ones growing on the mountains are sour — like really sour. If you come to Kazakhstan, you’re probably better off just buying apples from the supermarket, since those have actually been cultivated,” Malko said.

For those interested in trying out a dish from Kazakhstan cuisine, Malko suggests starting with shelpek, Kazakh flatbread. This food is relatively easy to access and prepare, and is often accompanied with watermelon. If people are interested in the more traditional Kazakh foods, Malko recommends beshbarmak.

One local restaurant that serves beshbarmak on their menu is ​​called Halal Dastarkhan. Located around an hour away from school, it is a little far, but is a unique culinary experience for those who are willing to try it.

“I would say that my favorite food is beshbarmak, because it’s actually extremely delicious. I’m not even joking — I want to eat it right now,” Malko said.