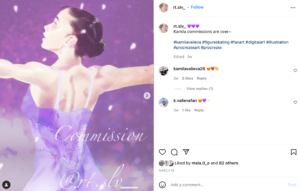 Permalink
Sophomore Danni Deng has been taking art classes since she was five years old, and recently began selling her digital work.

In February,  sophomore Danni Deng started her Instagram art account, @rt.slv_; at the time, she never expected to gain much attention, much less that of provisional Olympic champion Kamila Valieva.

After painting commissioned portraits of Valieva for a fan, Deng began to show her work on Instagram. To her surprise, Valieva herself liked the post and commented heart and clapping emojis, motivating and driving Deng to continue posting on the account.

Since first posting, Deng has been doing art for commissions, at a rate of around $20 to $30 per piece. So far, she has painted eight commissioned pieces, mainly for her peers at school as well as other friends. Deng uses these commissions to fundraise for Inclusive World, a local charity that helps develop skills for differently-abled individuals.

These experiences have changed Deng’s perspective on art by allowing her to give back to the community while doing something she loves. Though Deng has been taking art classes since she was 5, being recognized by Valieva has made her more passionate about art; she now plans to pursue an art major in college.

“I’m trying to take art more seriously now, but I’ve been creating art casually for ages since I have a mother who is a designer,” Deng said. “Back in China, she was an interior designer so she raised me trying to knock some taste for art into me and has been heavily involved in my art journey.”

In China, Deng took classes that had more stylistic freedom, mainly surrounding acrylic painting. But, since moving to Saratoga, she has taken on more technical classes at two different art studios. These classes have taught her visual aspects of art, a teaching style that differs from the more laid-back approach that she was used to in China. Deng is currently enrolled in Art 3 and AP Art History and plans to take Art 4 in her junior year, followed by AP Drawing in her senior year.

Outside of school, Deng spends four hours on Sundays taking oil painting and sketching classes, and also meets with a counselor on Tuesdays and Saturdays for art portfolio preparation — she estimates she spends roughly 16 hours weekly on her art in total. Over the past years, Deng has been focused on drawing for her art portfolio for college as compared to her previous focus of drawing as a side hobby. On average, it takes her between three to five hours to draw portraits, a skill she has honed over the course of her many years.

One of Deng’s favorite pieces, which recently won her a regional Silver Key award at the Scholastic Awards, is a self-portrait in graphite and red.

“The art is meant to represent how I ‘present’ myself to other people,” Deng said. “It’s also about how I feel a person is shaped by their surroundings and the people around them.”

The inspiration behind the creation of this piece is her impression of how people have various faces that they present to others. The graphic drawing in the back symbolizes how others see her while the red outlines show how she envisions herself.

Though she occasionally struggles with art block, a period of time where artists struggle with creating a piece, Deng has found taking frequent breaks and using other artworks as effective inspiration.

In particular, Fra’ Filippo Lippi O.Carm, an artist she learned about in AP Art History, has influenced Deng’s work significantly.

“In Lippi’s ‘Madonna with Child and Two Angels,’ the line art and almost watercolor-like quality really stuck out to me,” Deng said. “In most of his works, there’s something that I like and will try to implement that into my next piece.”

In addition to following the work of classical artists and realistic Renaissance art masters, Deng also closely follows a handful of illustrators on Instagram including @wlop and @kelogsloops.

“I love beautiful things, and doing art helps me to create something aesthetically pleasing,” Deng said. “For me, art is a form of self-expression, and I want to create things that are meaningful to me, and that will also resonate with others.”