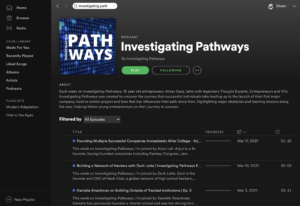 Get to know Saratoga High’s resident entrepreneur, podcaster and drone-enthusiast.

A couple quick clicks through Spotify brings the audience to a bang of drums and electronic music filling the background as a voice begins to say, “Welcome to Investigating Pathways.” The recording is a podcast and the host is sophomore Arnav Garg.

Garg started the podcast to get advice from tech entrepreneurs for a project he’s working on with Madhav Nair, a sophomore at Lynbrook. The result was a podcast that now boasts more than 500-600 listens per episode, each of which features a conversation with entrepreneurs and venture capitalists who have found success in the tech industry.

The idea for the podcast originated from a drone-building business, an interest Garg has harbored for a while, he said.  But Garg frequently got hurt while building with a soldering iron, so in December 2020, he and Nair decided to create a build-your-own drone-kit — called Asteria — for assembling drones without the dangers of soldering metal.

“Madhav and I were both like, ‘We’re clueless, we’re idiots and we need to learn a little bit more,’” Garg said.

Garg said he messaged some of his existing connections in the tech industry and asked if they were willing to give him advice. Eventually, the conversations morphed into a full-blown podcast.

“I got super interested, so I ended up making them public and publishing them on Spotify and YouTube with some light editing,” he said.

Each week, Garg meets with a professor, venture capitalist or entrepreneur — whom Garg calls “thought leaders” — and talks with them about their journey, successes, insights and current projects.

So far, Garg has published six interviews with business leaders including CEOs like Jason Fried of Basecamp and founders like Eric Bahn of Beat the GMAT. Garg tries to end each episode with a handful of fun questions; for example, “What’s your favorite number?” to lighten up the mood and showcase the interviewee’s personality to his audience.

Garg said he doesn’t have prior sound editing experience, but he’s been learning on the go.

“I didn’t avidly listen to podcasts, but I went back and looked at some of the common ones I knew,” he said. “I essentially copied them and then put my own stuff on it. For things like uploading into Spotify, I just found the best tools for it on Google.”

Garg also learned basic journalism skills through practice. In preparation for each conversation, Garg writes down his potential questions. When revising his list, he envisions the interviewee’s answer to the question, and if it seems trivial, he removes it from his roster.

However, the conversation’s course is not usually planned out beforehand, and Garg has learned to adapt in the moment.

While creating the podcast, he said he made it with a specific target audience in mind: himself.

“I was fortunate that the problems I was working on were very specific to me, so I essentially was my own target audience,” Garg said. “I just asked for advice from students who had similar interests but were also interested in figuring out solutions.”

One of these students is sophomore Rishi Gupta, who has listened to some of the “Investigating Pathways” episodes and recommends it. He said that the podcast was enlightening not just for himself as a listener, but also for people who have a passion for business and venture capitalism.

“I like how Arnav talks about what successful people did as a kid, which is important,” Gupta said. “A lot of other podcasts are from the point of view of a 40-year-old dude, but Arnav has a certain air about him that makes the podcast feel relatable.”

Through this podcast, Garg has cultivated an appreciation for networking. Not only does it allow him to connect with more potential interviewees, but it also bolsters his response rate.

“To get more people on the podcast, it was important for me to have some sort of starting point,” he said. “Instead of cold emailing a hundred people and maybe getting a response back from two or three of them, I was able to reach out to existing connections and leverage those to grow the podcast faster.”

As of now, Garg has 14 episodes in the can and has many more lined up next, exceeding his initial expectations. He is unsure of how many more episodes and seasons he will create, but he plans to keep uploading episodes for as long as he can. If he runs out, he will call that the end of the season until more recordings can constitute a new season, Garg said.

Despite the unexpected twist to his drone-kit business, Garg kept the original intent in mind as he asked each interviewee for feedback on Asteria, his drone kit idea. Prior to each recording, Garg privately pitches his and Nair’s business concept to his interviewee and writes down the interviewee’s thoughts.

Garg advises other teens seeking to start a passion project to outline their goals and focus on problem-solving. Once they’ve figured out which problem they hope to solve, they need to invest a lot of their time into crafting the best solutions.

For him, the journey from aspiring podcaster to actual podcaster has boosted his confidence.