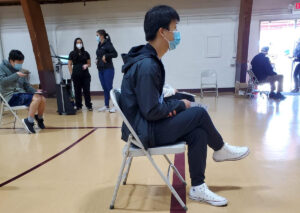 Senior Wilson Fung sits as he waits to receive his second dose of the Pfizer vaccine.

On March 23, at a Stockton vaccine clinic, senior Wilson Fung filled out his name, address, contact information and medical insurance number before handing the form to the passing registrar to verify his identity. He waited.

Finally, with all his information confirmed, the mobile vaccination station worker gave him his Pfizer COVID-19 vaccine. With the jab, Fung breathed a sigh of relief — his herculean efforts to find a vaccine appointment had finally paid off and he could safely return to work at his food service job at TeaTop. He was one of roughly 25 percent of American who had gotten at least one dose as of March 23.

“I got my vaccine up at Stockton because they had a number of extra doses and sent out a signup for anyone over 16 to make appointments,” Fung said. That day, his entire family received the vaccine, including his parents, older sister and younger brother sophomore Andy, who just turned 16.

With the recent easing of vaccine prerequisites and President Biden’s new goal of 200 million vaccine doses in 100 days, the vaccine rollout has slowly but surely ramped up.

As of March 15, only students with serious health or developmental conditions, essential workers or COVID-19 vaccine clinic volunteers were eligible for vaccination. Some students who fit these criteria are slowly getting vaccinated.

Of the 40 students who responded to a poll sent in the school Facebook group, 29 plan to or know someone who will get vaccinated and 5 students have already gotten vaccinated.

Junior Amarangana Tyagi scheduled an appointment online and will get her first dose in late April or May.

At first, Tyagi didn’t think she was eligible, but after her employer informed her that she was considered a healthcare worker due to her occupation as a lifeguard, she started to look for appointments.

However, not everyone has been as lucky to find appointments as Tyagi.

Junior Samantha Wiesner is eligible to get the vaccine because of her job as a restaurant worker, but she has struggled to find an appointment due to her age: only the Pfizer vaccine has been approved for her age group (16-18) and most vaccination sites don’t have systems set up for minors.

“Getting an appointment has been a nightmare,” Wiesner said. “It has required going online and calling vaccination sites daily.”

Although Wiesner may be low risk, she said getting vaccinated is important because she is “around both customers and employees who are at higher risks of illness.”

Ultimately, Weisner succeeded in making an appointment to receive the shot on March 29 at Levi’s Stadium.

Another student, sophomore Anand Agarwal, said his entire family has already received their first dose through walk-ins, but Agarwal hasn’t received the vaccine himself. The reason: Most sites offer the Moderna vaccine, which has not been approved for teens.

Nonetheless, if Agarwal gets the opportunity, he will take the Pfizer vaccine, he said.

Other students have received the vaccine due to health concerns. Junior Maanvi Chawla has Type 1 diabetes, making her eligible for the vaccine.

Chawla had an easier time finding an appointment than some teens.

“My mom found the [California Vaccine Scheduling] website that allowed me to schedule an appointment for about a week later,” she said. She got her first dose on March 25.

The final group of students who have gotten vaccinated have done so through walk-ins.

At the end of each day, many pharmacies and vaccination sites have leftover doses from no-show appointments. Considering the limited shelf life of Pfizer and Moderna vaccines, workers sometimes administer them to those without appointments — even though they may not fall under stringent state guidelines — rather than let the vaccines go to waste.

“If you have the opportunity to get the vaccine, please do so. Every shot is one step closer to going back to normal,” Fung said.