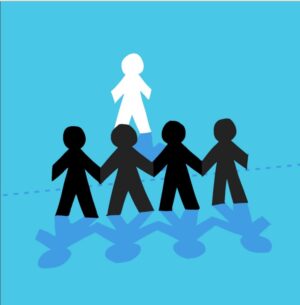 A cooperative living house in Berkeley known as the “POC (people of color) Theme House” has made recent news after banning white students and visitors from entering its common areas.

The new rules require all white guests to be “announced in the Guest Chat if they will be in common spaces with [residents]  and if they are white,” according to the New York Post. Such a decision has, and should continue to be, shunned by the public for its blatant division of different races under a naive, discriminatory generalization of all white people.

Berkeley’s co-op system has become increasingly popular as normal housing rates have skyrocketed, and many houses can hold up to 60 students. Other theme and gender-specific houses have been created, some serving the LGBTQIA+ and female-identifying populations of the school.

The POC Theme House was established in 2015 to serve around 56 low-income, first-generation and marginalized students of color who have been affected by racial violence. At its founding, it did not restrict who could enter and exit the premises of the house.

In the past couple years, however, the house has become notorious for fostering a hostile environment, sparking unprovoked conflicts rather than fostering inclusion and diversity.

Of course, if a negative incident occurs with a particular individual, whether they are white or another race, it’s obviously acceptable to ban them from the house.

But lashing out under the assumption that all white people enter the house with malicious intent backtracks the progress that many other POC organizations are fairly working toward.

POC members of the house claim they are looking to stop making “whiteness” central to the living experience of their members as an excuse to uphold these racist views, but there is a fine line between working toward inclusion and branding exclusion as inclusion.

Since the house is not affiliated directly with UC Berkeley, the members feel some sort of immunity toward any consequences they may face. However, as a project that serves the students of UC Berkeley, their actions unjustly harm the reputation of the school, regardless of their unofficial affiliation with the university.

To someone not familiar with the university, the house would immediately seem discriminatory and unwelcoming to specific demographics. Only 25.4% of the school is white, and an even smaller subset uses such housing programs. The majority of the school includes POC (with most being Asian Americans), and already harbors a diverse community in most housing situations. There are also many POC student associations on campus that properly advocate and celebrate POC culture, rendering a group like the POC Theme House not only damaging, but effectively pointless.

Organizations like the POC Theme House only further the divide between people of color and the non-POC population. Separation only increases the racial tension, as opposed to the unification brought from movements like Dear Asian Youth and Black Lives Matter.

Instead, the POC Theme House should achieve their goal of fostering a safe environment for POC individuals without resorting to flagrant racism against white people.