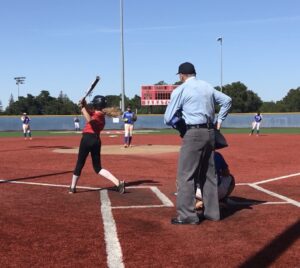 Photo by Victoria Hu
Freshman Sydney Riera swings the bat during the Falcons’ last league game against Santa Clara on May 12, where the team won 15-4.

Permalink
The team is working on winning their CCS division.

Despite a rough start to their season, the softball team qualified for CCS on May 19, with their first quarterfinals game set on May 21 at home against Piedmont Hills.

The team hopes to advance to the CCS finals. They need to win three games to win their CCS division.

“We’re really excited because nobody on the team has made it into CCS before,” said senior captain Morgan Curtis, who plays pitcher. “We’re planning on taking it one game at a time until the final rounds.”

Before qualifying for CCS, they placed third in the El Camino League behind Cupertino and Gunn, with a league record of 9-3 and an overall record of 14-6.

While the team worked hard to prepare for their game on May 10 against Cupertino, ranked No. 1 in the division, they lost in a tight 2-1 game. Previous games include wins against Lynbrook on May 5, Monta Vista on May 3, Palo Alto on April 28, and a loss against Gunn on April 26.

Captain and junior first base Lily Guzman said one of her biggest highlights of the season was the team’s close 5-4 victory against Carlmont on April 9. Being in low spirits and short-staffed with only 10 players, they didn’t expect to win. However, junior catcher Irene Frazier and Guzman’s home runs tipped the game in their favor.

In addition to efforts by the captains — Guzman and seniors right field Arya Taymuree, Curtis and center field Erin Wu — to exercise positive encouragement, this streak of wins helped boost team confidence after several initial losses that occured as a result of difficulties adjusting to a young roster and the loss of four star players to graduation.

While some players initially lacked confidence to believe in CCS qualification, Guzman held high hopes due to their recent five-game winning streak. The team found out they qualified on May 20.

“We have members who have played travel ball guided by club softball, so we only have one or two unexperienced players,” she said. “Even then, some of the less-experienced players are phenomenal as beginners.”

Sophomore shortstop Nancy Lei, who joined the JV team this year without any prior experience playing softball, has been noted for her skill at hitting the ball far.

With many JV players pulled up to varsity to fill in for missing players, Lei said playing tougher games in varsity has helped her gain more experience.

The team also grew closer as a whole over the course of the season. While Curtis said the team’s only bonding experience was going to Yogurtland after a game, the girls became more comfortable with each other after working on techniques their coach recommended.

Curtis also said coach Mike Davey incorporated communication strategies into their practices to aid the team in games. In group practices, Davey mixed partners up to make players interact and become more comfortable with each other.

“Overall, I’m really proud of how our team did,” Guzman said. “We had an amazing season for having a team with some who have never played softball before.”