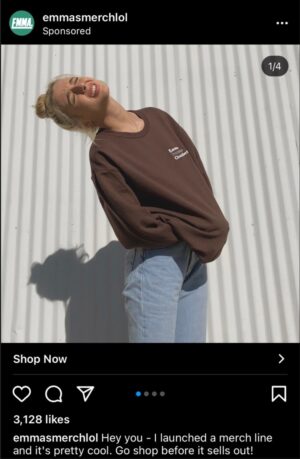 With the growth of social media, many people are becoming pressured into buying clothes from certain brands, leading to brand-obsessive buying patterns from teens.

When she started high school, Samika Agarwal, now a sophomore,  remembers wondering why so many of her friends were obsessed with Urban Outfitters.

For one thing, all of its products were seemingly overpriced.

Then she began going there on shopping sprees with her friends — and saw herself genuinely liking Urban Outfitters. She’s not sure if it was from her own innate interest in it or peer pressure.

This phenomenon of teens being lured to buy from brand-name stores like Urban Outfitters has become especially intense on social media. Logging into their accounts, they often find themselves in the crosshairs of highly targeted corporate campaigns on platforms such as TikTok and Instagram, and the overheated marketing shows no signs of abating.

Social media use has exploded over the past decade, with the United States having almost 80 million people on TikTok and 107 million people having Instagram accounts.

“These trends have pressured me to buy things that I'm probably not going to use three months later,” she admitted.

Vasudev has observed new trends appear every couple of months and students feel obligated to follow them even if they do not feel personally attached to that particular style. Vasudev and Agarwal have seen the effect of these influencers’ popularity, such as YouTubers Emma Chamberlain, with 9.88 million subscribers on the platform, and Hannah Meloche, with 2.05 million subscribers trends, a notable one being the VSCO Girl.

The VSCO Girl trend was popularized by social media influencers in mid to late 2019. They deemed a certain style of dressing as VSCO, playing off the name of a popular photography app for mobile devices. VSCO girls often wore name-brand items such as Hydro Flasks, Pura Vida bracelets and  Birkenstocks.

Not only did this trend increase the popularity of social media influencers like Chamberlain and Meloche, but it also greatly increased sales in these items. One of the biggest sales increases was orchestrated by Hydro Flasks, whose sales increased by 239 percent in 2019 according to the Daily Mail.

Vasudev has seen the effect of these influencers’ popularity in boosting sales of items.

“Sometimes you see a certain clothing trend or brand that a TikToker will pose in, and all of a sudden, a bunch of people want to buy clothes from that store and dress like these influencers,” Vasudev said. These ads don’t come for cheap , though. As of 2021,  TikTokers can earn anywhere between $200 and $20,000 for a branded video.

What is so effective about these mediums? Agarwal and Vasudev point to how these ad campaigns work at a subconscious level. Friend groups often buy the same items as each other in order to fit in and as demand grows, it results in steeper prices for the clothing.

As noted in a study done by the Asian Journal of Home Science, adolescents tend to have their buying behavior more affected by social and cultural values, many of which have a significant tie to the ideology of their peers.

Agarwal said this constant appraisal of certain brands from social media and friends has contributed to her buying more clothes from trendy shops such as her recent Brandy Melville sweatshirt that she bought for $60.

“It’s not that I necessarily need them, but other people look cool and fancy in them, which makes me want to buy clothes from those stores,” Agarwal said.

According to analysis from the University of Arkansas, social acceptance is what makes some brands so effective. Teens often think that a certain style or brand is what allows them to be part of a community. Additionally, not wearing clothes from a certain store could be a cause for friends making a nonconformist an outcast from their group or even bullying them.

Many stores have done brand sponsorships with influencers like Charli D'amelio and Addison Rae Easterling as well as having their own social media pages. One example of this is Starbucks, well known as a highly popular teen hangout. In part, the cool factor of Starbuck comes from its sophisticated use of social media.

“Starbucks has become a go-to meetup place,” Agarwal said. “When trying to choose a place to meet up with my friends, it's one of the first places we look at, especially since it's known as a teen coffee place.”

The effects of social media advertising that targets teens are something society will continue to sort through. And this trend has only just begun.

“I sort of feel a sense of alienation from people my age if I don't follow popular trends,” Vasudev said. “However, I hope people realize that trends don’t last forever, and that we should instead be thankful for what we have.”