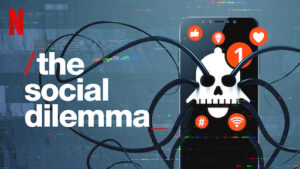 Photo by Courtesy of Netflix

A promotional poster for “The Social Dilemma” depicts a monstrous device with tentacle-like wires.

Netflix documentary explores the ins and outs of the internet in an increasingly online world.

“A magician shows you a card trick and says, ‘Pick a card, any card.’ What you don’t realize was that they’ve done a set-up, so you pick the card they want you to pick. And that’s how Facebook works.”

This explanation of how much control social media has on information is just one of multiple eye-opening lines from Jeff Orlowski’s recent Netflix documentary “The Social Dilemma.” The hour-and-a-half piece delves into the complexities of social media and presents a compelling warning about the exploitation and addiction social media users face, especially teens.

The documentary opens with introductions of the interviewees: former employees at various tech companies, from Tristan Harris, once a design ethicist for Google, to Tim Kendall, a past executive at Facebook and ex-president of Pinterest.

The interviewees discuss a wide range of topics, presenting both hypothetical scenarios and experiences they had at the tech companies they worked for. For example, Kendall described how employees worked on user engagement in Facebook by tweaking different algorithms.

Between the interview scenes, Orlowski directs a dramatized portrayal of a typical suburban family. Two teens are depicted as victims of the companies’ algorithms, with the youngest daughter struggling with body image and the teenage son falling into radical, logic-straining conspiracy theories.

Although I found the acting and plot unrealistic at times, including a scene where the daughter smashes a Kitchen Safe in order to get her phone back, they do draw attention to how addictive social media can be.

With all of its information, “The Social Dilemma” prompted me to evaluate my own experiences online, especially when it covered the depth and specificity of targeted information. In a chilling montage narrated by interviews, the documentary explains how search results differ by location and how people have entirely different “facts” and “realities” based on what the algorithm gives them.

The documentary proceeds to relate this to modern political polarization, blaming it on multifaceted algorithms and their “rabbit holes” of information.

Another key detail that stood out to me was that pausing on a photo or video for even a few seconds longer could drastically alter what I would see on my feed, as compared to someone who may have scrolled faster. I was alarmed at how extensive algorithms actually were and how far companies would go to maintain user attention.

After watching “The Social Dilemma,” I began to pay closer attention to my online activity, and I felt more aware of what I was viewing and how I had gotten there.

The documentary was both insightful and relevant, especially with my increasing screen time and use of social media platforms. As someone who has had mostly positive experiences with social media, it was intriguing to see how the algorithm knew what I wanted to see. It also concerned me to think that what I was seeing could be specifically tailored to fit me, and perhaps not reality.

After watching “The Social Dilemma,”  I realized I needed to stop feeding so much of my attention to the algorithm, which is designed to capture and hold my attention. I also decided that using my phone less would be healthier for both my mental and physical health. I may not stop using social media completely, but my screen time has decreased a little ever since watching.

To anyone who uses social media, “The Social Dilemma” is a must-watch documentary that will certainly leave viewers contemplating the reality of what they see on their screens.