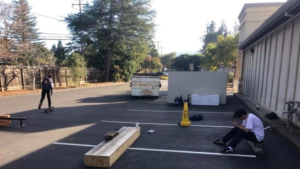 Sophomore Dan Garniek and freshman Dylan Bryan created a Change.org petition on March 22 asking city officials to build a skatepark in Saratoga. The effort had garnered 335 signatures as of late April.

Once the petition reaches 500 signatures, the organizers of the petition plan to email mayor Yan Zhao a presentation explaining why a skatepark would help the community and decide together where this could be built.

“We want to build a skatepark where skaters from Los Gatos and Saratoga can find a safe place to skate without disturbing the public and to continue their passion for the sport,” the petition says.

Currently, the closest skateparks to Los Gatos or Saratoga are more than 25 minutes away in Santa Clara. As a result, skaters are forced to skate in “street spots” such as schools, churches and parking lots since other places are unsafe or closed off.

“Because of this, we encounter confrontation with the public, which sometimes develops into harassment,” freshman Dylan Bryan said.

When skating around neighborhoods, residents will sometimes call the police or security guards to force them to leave. However, many supporters of the petition see the appeal in creating a local skatepark.

As of April 26, the 27 comments under the petition are all in support of the skate park.

“If you want kids of all ages including skaters, BMX [bike riders?] and scooters to have safe fun and a legal place to enjoy their hobby, we should invest the means in our children and build them a skatepark,” a signer commented.

Bryan also feels that a skatepark would help the community, as people would not have to pay for the damages caused by skaters skating in places not meant for the activity.

Bryan estimates that a skatepark would benefit around 50 or more skaters since there would be skaters coming in from Saratoga, Los Gatos, Sunnyvale and other nearby areas.

One commenter noted that a skatepark is especially necessary now because the pandemic is preventing many students from participating in sports, as many team sports have pandemic restrictions; people have taken on skating as a new hobby and form of exercise.

“Skateboarding is on the rise and the way to safely nourish this growing culture is to build a skatepark,” Bryan said. “The mainstream social media influence on the skateboarding community affects how many youth are interested in skateboarding. It’s a very caring and welcoming culture."