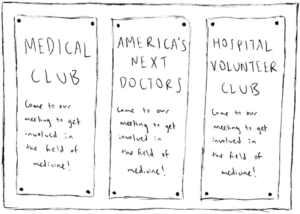 This year, the school has 69 clubs — 33 academic, 19 cultural and 17 service. On a given day, there may be as many as five or six clubs meeting during the same lunch period.

Although a variety of clubs can help students who have specific passions in certain fields, having fewer but broader clubs would foster more genuine interest as well as a more serious environment.

The ASB, the student leadership group that governs clubs, should be more cautious of approving new ones and enforce a policy of consolidating similar clubs when the number of clubs grows too large. By combining similar smaller clubs into larger, more influential ones, more students would likely be incentivized to attend meetings due to the larger platform of the new clubs.

For smaller clubs, many club attendees at lunch meetings are officers’ friends, not students who are genuinely interested in the topics at hand. As a result, meetings end up becoming socializing locations for friend groups. This harms underclassmen in particular who want to attend club meetings but are scared away by the feeling of the club as a clique instead of a healthy learning environment.

Current ASB regulations mandate that clubs meet at least once every other week, with a minimum of 12 non-officer members at each meeting. Several clubs either do not reach this number or only reach it because officers drag their friends to their meetings.

For instance, the school currently has multiple clubs about the field of medicine, such as Global Health Club, Teenagers for Medical Support and Future Doctors of America. If these clubs were consolidated into a single club with the aim of volunteering in local hospitals or teaching medicine to younger students, the Medical Club would gain more traction and be more successful than three or four smaller clubs that don’t attract enough members.

In addition, having fewer clubs would greatly decrease the number of officer positions available, deterring students from joining clubs solely to fill up the leadership section on their college applications. Currently, some clubs even offer officer positions to those who haven’t gone to a single meeting, only exacerbating the problem of clubs being application fodder for students applying to college. With fewer clubs, truly qualified and dedicated individuals would become officers instead of simply anyone who is willing to take the role.

Students should only be excited to lead something that they are already involved in. The status of club officer should be earned through dedication and commitment, not given freely to students pouncing on an opportunity to show off to admissions officers.

Consolidating clubs is in everyone’s best interest. More students would be attracted to a club with a larger platform, and officers would not need to make their friends who have no interest in the club attend their meetings. ASB should be responsible for creating healthy club environments for students to attend.

In high school, students should be in the process of exploring new fields, not choosing between four similar clubs that each have no regular attendees. More general clubs that encompass an entire subject should be the norm, rather than overly specific ones only founded to bolster someone’s college application.