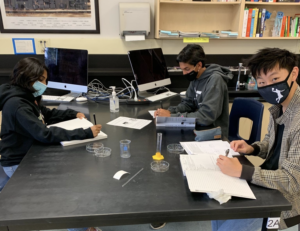 Every Blue Day after 4th period, senior Arya Ashok rushes to the parking lot along with juniors Jeremy Lu and Ishir Lakhani to hop onto one of the school’s big white vans. Together, they are driven to Los Gatos High School by assistant principal Matt Torrens for a 6th-period Advanced Science Research (ASR), an advanced laboratory science course where students work on laboratory and field research projects of their own design.

Ashok, Lakhani and Lu are currently the only three SHS students taking the course; five SHS students started the semester in the class but two had to drop it because of scheduling issues.

They are all taught by science teachers Cathy Messenger and Jennifer Lee, who are co-teachers for the same 6th period class. There are 25 students enrolled in ASR and this is the first year Lee has joined Messenger in teaching the class.

Students decide which subfields they wanted to study at the beginning of the year and receive the necessary materials to get started. Different subgroups include computer science (CS), engineering, biomedical engineering and physical sciences.

Messenger believes the class takes a lot of effort, but is very satisfying, especially since she learns new things from students every year.

“I’m so excited that Miss Lee wants to join me because I could not find another teacher to talk to me for years,” she said. “It takes a lot of time for the teacher, but it’s so worth it.”

Ashok’s experience with the research-based class has been positive.

“Since you get to design your own projects, it’s very individual based,” she said. “You have the freedom to go deeper and do research in the field that you want, whether that’s theoretical physics, chemistry, or biology.”

Ashok thinks ASR has allowed her to see how research is often done in the real world because she has been able to experiment with lab equipment not normally used in traditional AP, honors or regular science classes.

Ashok said that although the class suits students who have spent a lot of time outside of school working on science projects, the class helps students no matter their expertise.

“I think this class is a great choice for everyone, since you really get to explore and learn a lot about a specific subfield in research, which is something that not a lot of high schoolers have experience in,” she said.

The class has been around for 11 years at Los Gatos High, but this is the first year it has been offered to Saratoga High students.

Students are expected to present their completed year-long work in March at the Synopsys Championship, a science fair hosted by the Santa Clara Valley Science and Engineering Fair Association. A select few of the projects qualify to advance to state and national fairs. ASR also helps students create their project materials for the Synopsys Science Fair by organizing the forms, board, presentation and abstract.

Students in the course create a wide variety of projects, ranging from creating a phone app to visualize objects for the visually impaired to investigating a specific mechanism for causing cancer using a little microscopic worm as the model, Messenger said.

In the first six weeks, the class focuses on trying to build lab skills with more structured activities teaching basic lab techniques, basic statistics and how to measure things accurately.

Students also read and write journal articles, meet with teachers Jennifer Lee and Messenger about their ideas and present them.

“One of the things we both emphasize for every student is that to have a good experience in ASR, they pick something that they’re passionate about,” Messenger said. “That’s the number one goal and when students are passionate about their own project, they can take it places they never would have imagined.”

In the first six weeks, they typically start the period with two to three students speaking to the class about their idea and what they are struggling with, with other students asking questions and offering suggestions. Following that, they do a structured activity and meet with their teacher to figure out and fine tune their idea.

From there on, students turn to updating and working on their projects every class.

“After everyone’s science fair projects are in and finalized, they spend the period working on their individual project and asking for help when they need it and collaborating,” Messenger said. “But they always have presentations, with two to three students sharing their progress and asking for help.”

Though students are grouped based on their interests, students from working in different subjects can still help each other.

“A lot of times somebody who’s doing a computer science [project] can actually offer suggestions to people doing a totally different project,” Messenger said. “That’s one of the things that’s really neat about the class; there’s a lot of interaction.”

While there is an application process to get into the program, Lu believes anyone who shows interest, enthusiasm and knowledge about a specific field can get in; the current students in the class have various levels of experience in their respective fields.

“For example, someone with quadriparesis isn’t able to move at all, which makes my project effective because they would be able to communicate without needing to talk or use braille,” he said.

He believes that this class will help him further his research in these fields.

“It’s actually very similar to the offered STEM classes [STEM A and B] in Redwood Middle School,” Lu said. “The class is very project based and not as focused on the grade compared to other technical courses, but you still have to work really hard on the overall project itself.”

Lu said that because there are not a lot of tests or assignments with deadlines, it is significantly different from rigidly structured classes like calculus or physics.

Instead, students have been focusing on note-taking, documentation, researching articles, writing in journals and performing labs. The purpose of this is to familiarize students with both the technical parts of projects and the research process.

According to Lu, knowledge on research tools used is a necessary part of the project, since background information can often help the students decide whether or not to pursue that project based on the work that has already been done on it.

Lu became interested in the program after looking through the SHS course offerings document last March, and admiring the projects that other students made for past science fairs.

His favorite part of the class is that there are always opportunities to improve his projects through giving and receiving feedback. Lu also said he appreciates how supportive Messenger and Lee have been.

“Ms. Messenger is a teacher who genuinely cares about how you’re doing in the class. Ms. Lee, too,” Lu said. “She focuses on your mental state.”

Lu believes the class is rewarding for people who spend a lot of time outside of school working on a project, as they can continue to develop their work in a structured class.

“I think ASR is open to a lot of people who really enjoy their fields and just want to develop it more,” Lu said. “I am really glad for this opportunity since it showcases my abilities, and I’m confident in how my results [for the Synopsys Science Fair] will be because I know I put in and will continue to put in a lot of work.”