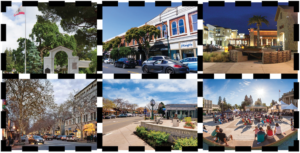 Photo by Saachi Jain
Combined photos of each downtown

Permalink
Historic and energetic downtowns provide a perfect escape after a long day at school.

In middle school, the feeling among Redwood students on an early release select day was unmatched. After getting let out early, you’d have the opportunity to walk a mile to Starbucks downtown, visit Wildwood Park with friends and be picked up by your parents in the evening.

It was a thrill — one of the first activities that made so many of us feel like “grown ups.” But as they say, your tastes age with you. Coming into high school, downtown Saratoga began to feel limited. We ventured out to other local towns like Los Gatos and Cupertino, while also going as far out to Los Altos and Palo Alto. Each city has its charms, and The Falcon set out to compare and highlight a few Bay Area downtowns.

Saratoga’s downtown is a place most of us are all too familiar with. Small and quaint, it is over 160 years old and has monuments to display its rich history.

Save for the Starbucks on the outer edge of downtown, Saratoga doesn’t feature any chain or retail stores; rather, there are mainly one-location shops, boutiques and restaurants.

Unfortunately, many of these places are expensive for your average unemployed high school student, parking can get limited and many of the lots behind businesses fill up on a Friday night.

Nevertheless, because the downtown only spans half a mile, from Starbucks to Sue’s Cafe, it is perfect for an evening stroll. It strikes the perfect balance of providing some social interaction, while not being overcrowded.

Tucked away next to Plumed Horse — the only Michelin Star restaurant in the area — are many salons, beauty bars and jewelry stores that surround a courtyard/shopping plaza area. Deja & Co. Exquisite Jewels, a luxury fine jewelry boutique, and Bal-Lance Hair Salon are two hidden but highly visited beauty stores. Bai Tong Thai Bistro and Rose Market are two popular food spots when you are in the mood for delicious, home-style ethnic Thai or Persian food.

Saratoga downtown’s small size contributes to its visual monotony over time. However, it is one of the most peaceful city centers to just relax and enjoy upscale shopping and dining. And you can’t beat the location.

In comparison to Saratoga, downtown Los Gatos is much larger and more commercialized. Over 100 stores span an area almost one mile across.

Since it is just a 10-minute drive from Saratoga, it makes a great spot for high schoolers, but just like Saratoga, it can drain the wallet.

At Dolce Spazio Gelato, one of the most popular spots in Los Gatos, a standard size cup is $6 before tax. For comparison, the same sized scoop at Baskin Robbins would cost just over $2.50.

There are many other Italian and American restaurants in Los Gatos such as Campo Di Bocce, Asa, The Pastaria and The Lexington House.

Both paid and unpaid parking lots line downtown, providing access to most commercial and shopping areas.

The Los Gatos Apple Store is one of the only ones in the area, and it’s not uncommon to see long lines there every time the next big thing from the company debuts.

Downtown Los Gatos is a bustling but comfortable location for a meal or relaxing walk, and has a number of attractions to keep you busy during the day.

Cupertino’s downtown — commonly referred to as “Main Street” — is only a 15-minute drive from Saratoga, but offers a drastically different scene, with an abundance of Asian stores. Boba shops and various Asian-inspired restaurants have popped up along Stevens Creek Boulevard. Its popularity among high school students has exponentially grown in the past few years.

Despite the prominence of Asian influence, Main Street has more to offer than just Asian-themed stores. Some of the busiest traffic stops in Main Street are Oren’s Hummus, an Israeli restaurant chain, and Lazy Dog, an American restaurant and bar chain.

Many sit-down restaurants downtown are centered in the Cupertino Main Street Plaza at the intersection of Stevens Creek and Wolfe. Recently, the city constructed a three-story parking garage with ample space and easy access to the main shops.

Some of the most popular drinks and dessert sports, including Alexander’s Patisserie, Icicles and Meet Fresh, are located on Main Street.

An energetic, lively subsection of Cupertino, Main Street is perfect for any type of socialization. Whether you are celebrating a birthday or enjoying an evening with your friends, you are guaranteed to find a spot that fits your mood.

Spanning all of University Avenue and its cross-streets, Palo Alto downtown has a great mix of commercial businesses and offices. The always-bustling University Avenue is home to a number of cuisines and cultures.

One highlighted restaurant is Coconuts, which serves Jamaican and Caribbean cuisine. Some popular items on the menu include jerk chicken and buttermilk cornbread.

Salt & Straw, a popular creamery chain, is guaranteed to have a long line in the evenings as well, since it is one of the few ice cream shops in the area.

Many expensive boutiques and smaller stores are found in downtown Palo Alto, though the nearby Stanford Shopping Center has many more chain stores such as lululemon and Starbucks.

There are many recreational activities in the surrounding area, including hiking trails such as the Baylands Natural Preserve and the Stanford Dish Loop.

The areas around University Avenue have a lot of street space for parking, and there are also parking garages distributed throughout the area.

Downtown is also home to the Computer History Museum, which has technology and documentation dating back to the 1940s.

Thirty minutes from Saratoga, Palo Alto downtown is a lively area that is often overlooked due to the nearby university. Though the center of the town doesn’t have much nature or greenery, centralized plazas with live music provide a great place to eat food and do work.

In the past few years, Los Altos has renovated its downtown to integrate native foliage and greenery.

The majority of downtown is condensed into a triangle shape around 0.6 miles across. The main streets within that triangle are lined with shop after shop, and high foot traffic as a result. You can find a store for almost any need, from clothes to home improvement and toys.

Los Altos is home to many hiking trails, open preserves and parks that are also highly visited. Some include the Hidden Villa Farm, Windy Hill Open Space Preserve, and the San Andreas Fault Trail. Though primarily housing boutiques and small businesses, there is a Safeway in downtown which serves most of the surrounding community.

For the enthusiastic foodie, it also features restaurants of almost every cuisine. Mediterranean, Japanese, Mexican, American, Georgian and Californian restaurants line Main Street, which runs directly through the triangle.

About a 25-minute drive from Saratoga, the downtown area is concentrated, and also houses two hotels and five banks.

Included in the modernization of the city are unusual sculptures, as well as bike racks shaped like various objects, from ice cream to text bubbles.

Some restaurants like Los Altos Grill, a barbeque and homestyle meal restaurant, and Pompeii, an Italian joint, are hot spots in Los Altos.

All in all, Los Altos is a modern downtown that packs a lot of people in a small space, providing a contemporary setting perfect for socializing.

Just north of Menlo Park and Atherton lies the bustling Broadway Street of Redwood City. Broadway, the center of downtown, has great eats, entertainment and educational spots to visit.

Courthouse Square is a plaza with many food options and nice seating, but is also home to the San Mateo County History Museum. On the first Friday of every month, the museum — which has an exhibit with 24 model ships and boats — has free admission. It is a great afternoon activity for anyone, regardless of age.

If you are ever in Courthouse Square during the summertime, you can expect to see concerts and street performances in the evening.

Broadway Street combines Latin, Asian, American and many other cultures, allowing visitors endless choices of food and entertainment. Some highlights include popular Mexican restaurants La Viga and Quinto Sol, along with Vesta pizza.

The historic Fox Theater was opened for film in 1929 on Broadway Street and has now been added to the National Register of Historic Places for the various live performances and shows that have taken place there over the years.

It can be a 40-minute drive to the city; however, you can save gas with the CalTrain, which runs from San Jose up to downtown, costing just $12 round trip.

If you’re looking for a close-by hangout spot with great eats, nightlife, and buzzing energy, both Los Gatos and Cupertino meet your needs. Though farther away, Palo Alto and Redwood City have unique culinary experiences and cuisines, and provide a safe and clean spot to explore. Saratoga and Los Altos are both small, though they house many small businesses that are one of a kind.

Overall, each downtown has iconic food, drink and shopping spots that render each of them attractive. Although most are on the expensive side, they are great places to visit for your next getaway with friends and family.