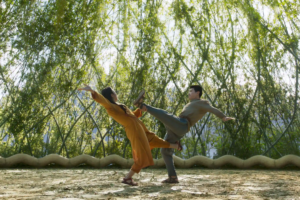 The past two years have been duds for superhero movies. Movies like “Black Widow” and “Suicide Squad” have not met the expectations set by their predecessors, failing to compete when it comes to both plot and entertainment value.

Marvel Studios’ latest entry, “Shang-Chi and the Legend of the Ten Rings,” ends that slump.

“Shang-Chi” delivers as one of the best films in the Marvel Cinematic Universe (MCU), in the process creating a much-needed win for Asian-American representation.

From the start of the movie, Asian cultural elements, such as martial arts fighting and traditional shrines to the dead, set “Shang-Chi” apart from other Marvel movies.

While English is used in the vast majority of the film, the Mandarin spoken in the beginning honors the motif of family in the movie in a more intimate and authentic way. Along with scenes accompanied by slower Chinese-style music during romantic dance-like fighting sequences — inspired by Chinese dramas and Jackie Chan’s filmography — the film is a stark departure from the normal gray, beat-pouncing starts of MCU films.

Though I’m not Chinese-American, I was still able to relate to the portrayal of Asian-Americans. The movie falls for a fair amount of Asian-American tropes like strict parents and high career expectations, as well as a brief mention of ABC, or “American-Born Chinese,” a term sometimes considered to be derogatory.

However, its treatment of the model minority myth was well handled: The opening act shows two of the protagonists happily working as valet drivers despite not being paid well, a career choice that would typically be a disappointment for stereotypical Asian characters. The movie places the importance of friendship and fun over lofty career goals. The main characters are proud of their noncompliance with the myth — a distinct departure from previous Asian-American films.

The film is also a watershed moment for Asian-American representation in Western media. Though there were other films aimed at the same goal, like “Snake Eyes” or “Mulan” — both of which weren’t very good — this film is one of the first Asian-American action blockbusters with a primarily Asian cast and production team.

However, it’s not just the cultural representation that makes this film one of the best movies of the year so far. A leading factor to the storytelling success in “Shang-Chi” is the worldbuilding of a previously unknown land, immersing viewers much like “Black Panther” did in 2018.

The film is partially set in San Francisco — a nod to the Bay Area’s statistically higher Asian-American population — and later shifts to Macau, China, and a magical land called Ta Lo.

Like Wakanda, Ta Lo is an advanced society composed entirely of people of color — in this case, people of Asian descent. The magical land, described as another world reached via a portal (is this our first glimpse at the multiverse?), has exotic animals, dragon weaponry and majestic Asian architecture. As Shang-Chi sings throughout the movie, it’s a “whole new world.”

The film also benefits from dynamic character portrayals: a hero worth rooting for, a despicable yet redeemable villain and strong female characters.

Simu Liu stars as the titular character, Shang-Chi Xu, and he does not disappoint. His comedic chops and impeccable martial arts skills make his character a true hero, with the savvy swag and applaudable morals to back him up. (On a side note, Liu threw a first pitch strike and backflipped at a Giants-Dodgers baseball game — so he’s automatically one of the best actors out there).

Famous Hong Kong actor Tony Leung plays conqueror Wenwu Xu, who yields the powerful ten rings, a weapon so powerful it could be an Infinity Stone.

Wenwu, the villain, is arguably a co-main character who sets the arc for most of the plot. Despite being a mass murderer, Leung manages to make his character appear round and dynamic to the audience by convincingly portraying complex emotions and motives.

The film also has a strong roster of female characters. Awkwafina stars as Katy, Shang-Chi’s best friend in America and the comedic lifeline of the film. At first, I had reservations about her obnoxiousness — I found her annoying in another action movie, “Jumanji: The Next Level” — but her performance in “Shang-Chi” was hilarious. Meng’er Zhang stars as Xialing Xu, Shang-Chi’s sister who, despite being excluded from training due to her gender, trains herself to be as good of a martial artist as he is.

Trevor Slattery, the character portrayed by Ben Kingsley who impersonated Wenwu in “Iron Man 3,” also comes back. The explanation of Slattery’s return in “Shang-Chi” is weirdly confusing given his connection to Wenwu, but die-hard MCU fans will understand the callback and others don’t need to know who Slattery is in order to understand the movie (watching “Iron Man 3” before “Shang-Chi” would help you understand that reference, though).

The end-credit scene in “Shang-Chi” is also the best since “Spider-Man: Far From Home.” Multiple major cameos and universe cliffhangers end the film, setting up connections to other MCU movies and a sequel.

“Shang-Chi” is a triumphant return to the pre-pandemic quality of movies and a tremendous step forward in representation. For both Marvel fans and casual moviegoers, this is a film worth watching (in theaters!).