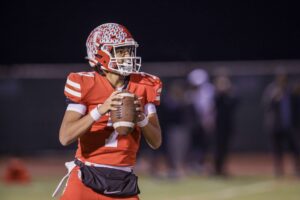 Photo by courtesy of Lori Timmons
Junior Shane Timmons scans the field as he prepares to pass.

Permalink
The junior initially joined football for fun and the friendships that stemmed from it but also ended up as an asset to the team.

When junior Shane Timmons started playing on the JV football team roughly three years ago, he wasn’t sure he would be any good. He just joined in hopes of immersing himself in the team spirit and overall fun of the sport. In fact, his parents even opposed him joining the team, thinking it was too dangerous. Nonetheless, during quarantine they let him try it out as a way to spend time outside.

He found football to be harder than it looked and was surprised by the amount of time he had to invest and the range of skills he had to learn. Fully committing meant spending 10 to 12 hours a week practicing.

Still, he was willing to make the commitment and the sport eventually led him to build better eating habits and lift weights for increased  strength.

“When I was a freshman everyone was bigger and faster than me,” Timmons said. “But once I noticed that I had to step up, I got a lot better.”

In his first year, Timmons had immediate success. He played in only a few games on the JV team before getting pulled up to varsity, although remaining on the bench for the rest of the season as a backup. But that experience was enough to make him want to continue playing. His dedication paid off — in sophomore year, he became the team’s starting quarterback.

Head football coach Steve Matos has known Shane since he became a coach for the school last year and said, “He had to catch up with the speed, mechanics and timing, and working on the weekends with teammates and watching film, Shane was able to progress really well.”

Timmons initially felt a lot of pressure to do well on varsity; since then gained confidence in knowing he is better than most of the players he faces from other schools. Timmons proudly remembered a key moment from a game against Lynbrook, his first touchdown on varsity in sophomore year.

“I threw it up to [senior wide receiver Seth Hulme] and I got hit really hard,” he said. “But after I got up I noticed that we scored, and I was really happy.”

In fulfilling his responsibilities of playing quarterback and running the offense, he focused on running plays they studied and practiced in the offseason based on their gameplanning for specific opponents.

“As a quarterback, you’re like the manager of the game, so you have to know what everyone’s doing on the field at every play,” Timmons said.

In the fall season, Timmons had 22 passing touchdowns and two rushing touchdowns. He threw for 120 completions and a total of 1,946 yards. Overall, his quarterback rating — a holistic statistic measured using other statistics like pass completion rate and touchdown-to-interception ratio — was 98.4. Timmons proved to be an elite asset to the team.

The team’s goal this season was to make the playoffs, but losses for three consecutive weeks put that goal out of reach; a bigger goal is rebuilding a program that has fallen on hard times.

“We just want to know what it feels like to win again,” he said.

There were moments in games when Timmons felt at fault for mistakes, but he tried to forget about them instead of letting them affect his mindset. He described it as resetting his memory in order to get back on track, a mindset that his teammates helped him build up.

“It’s tough being the man of the team, but Shane’s a great teammate,” Matos said. “A lot of the guys look up to him, and they’re holding him to high expectations, which I think is good.”

Timmons credits a lot of his friendships to football, saying that he wouldn’t be as close with his friends if it weren’t for the sport. He has even created strong friendships outside of school due to football.

“My teammates keep me motivated to just keep getting better,” Timmons said. “No matter how good or bad I do during the week, they just keep motivating me to keep my head up and keep going.”