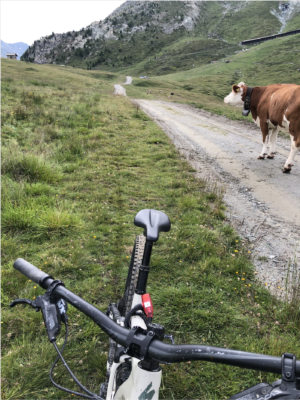 For mountain bikers, their first time riding a flowtrail, a constant downhill ride usually containing technical switchbacks (i.e.,hairpin turns), is a harrowing experience. Attempting it in Switzerland is a step further.

In the beginning of summer, I was introduced to mountain biking by friends who encouraged me to join them on rides. Despite not owning a proper mountain bike, it took just three rides for me to get hooked. I soon saved enough money from a part-time job to purchase a dual-suspension, carbon-frame mountain bike from someone selling it on Craigslist.

When my family traveled to Switzerland over the summer, the opportunity to bike in such a mountainous country was too great to pass up. After a couple days in Zurich, a 3-hour train ride to Zermatt took us to the foothills of the Alps. Upon our arrival, we stopped at a bike shop, where I promptly rented a Specialized Enduro bike, which was even better designed for terrain than my own.

It was only after I made the climb to the flowtrail trailhead that I realized that cable cars were making the journey to the top of the trailhead for a small fee. While the climb was instrumental to obtaining a better layout of the land, it took up riding time, a valuable commodity.

The flowtrail at Sunnegga is one of the most popular flowtrails in the world. Upon entering the trail, I understood why.

At every turn, the foothills of the valley gave me the impression of narrowly clinging onto the edge of a cliff.

By the time I reached the end of the trail, I decided that I would be spending the two days I had left in Zermatt riding. By the time the next morning had come, I had adjusted my tire pressure, bought a cable ticket and made my way to the top of the trail intersection.

During the second ride, the natural beauty of the alpine mountains in the south was even more exceptional. Although a cow nearly derailed me while I wasn’t paying attention on a trail intersecting a pasture, the trail itself was a surreal experience. Riding on these trails offered views of the surrounding alpine summits, and a sense of adrenaline while traversing the steep cliffside.

After returning to California and riding on local trails, it’s easy to miss aspects of the Swiss environment that are hard to replicate anywhere close to the Bay Area. Despite living near Santa Cruz and its intense mountain biking culture, Switzerland carried a different vibe and emphasis on the sport.

While the cycling trip nearly involved getting overrun by cattle, it was arguably the most captivating ride of my life. I’m unsure of where I’ll find myself riding in the future, but as a mountain biking capital, Switzerland is the metric.