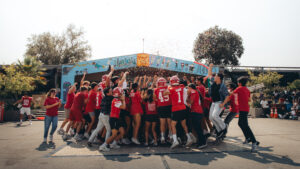 As the speakers blared the finishing notes of artist Lil Nas X’s “Industry Baby” at the seniors’ Homecoming quad day performance on Sept. 24, choreographer Sahil Shaik leaped into the air alongside 40 participants in the All-Boys dance (ABD) and waved at the crowd. He later described the move as poetic, expressing that “we were saying goodbye to Saratoga, with this being our last year here.”

Class vice president Kaylie Wong, who directed the quad day performance and choreographed the All-Girls Dance (AGD), said the loss of their junior-year performance to the pandemic served to motivate seniors this year.

“It’s crazy to think that the last time we had a quad day was sophomore year,” Wong said. “Normally people use junior year as a trial year where they experiment and incorporate new things. Because we never had our trial year, everything had much higher stakes.”

The seniors’ Homecoming skit centered around the plot of Phineas and Ferb building a roller coaster in their backyard during the summer rather than finishing their college applications, to the chagrin of both their mother and sister. The performance starred senior Nikhil Kapasi as Phineas, Ben Bray as Ferb, Naomi Mallik as Perry, Macey Hartmann as Isabella, Sadaf Sobhani as Candace, Samantha Weisner as Doofenshmirtz, and Rishi Atreya as Baljeet. There were a total of about 80 seniors and eight dances: AGD, K-Pop, Stunt, Girls Bollywood, ABD, Drumline, Color Guard and Partners.

Wong found that organizing Homecoming this year felt far different than previous years considering the pandemic and increased responsibilities. Wong was in charge of choreographing AGD and directing the full senior quad day event including organizing dances, creating decorations, writing a skit, planning run-throughs and more. As a result, Wong said she spent dozens of hours from mid July to quad day on Homecoming.

Shaik and Wong were both ultimately happy with the results of the performance; Shaik described the final product as “stellar,” while Wong said that quad day exceeded her expectations despite her initial worries. The seniors ultimately won first place, with the juniors at second, freshman at third, and sophomores at fourth.

“Jumping from sophomore quad day to senior quad day was a big shift, but I genuinely couldn’t be prouder of our class,” Wong said. “I think we really came together for homecoming and quad day and even though I’m sad this is our last ever Homecoming, our quad day was definitely one to remember.”