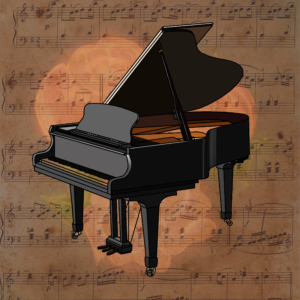 Photo by Courtesy of Anjali Phalke
Ethan Lin seeks to explore his passion for Piano as he transitions to college.

Permalink
As many college applicants strive to major in Biology or Computer Science, some seek to study their life-long musical passions.

While many seniors apply for STEM majors such as computer science, survey data on Naviance shows that around 13% want to follow subjects such as the arts, design, entertainment, sports or media.

Through the college recruitment or application process, some students highlighted their remarkable athletic ability while others described their experience as student leaders. Many, however, emphasized a remarkable ability they have often honed for years on end: their exceptional musical talent.

One of these students is senior Ethan Lin, who started playing piano at age 5. Since then, piano has become a crucial part of his life. He said his joy for music has been apparent for as long as he can remember.

“Piano is a way for me to escape from a lot of the pressures that we have academically,” Lin said. “I can express myself in a very unique and creative way through piano that other mediums don’t necessarily allow me to do.”

Lin was accepted under early decision admissions to Northwestern University, where he plans to major in a combination of piano performance and biology. In order to get into the program, he had to go through a “stress-inducing audition process,” in which he submitted a video and flew to the college’s campus in Illinois for a 10-minute audition on Nov. 17.

When submitting his music resume to Northwestern, he said the award he won in 2019 — the Certificate of Merit Panel from The Music Teachers’ Association of California — made him stand out among the other applicants. This award also “was what inspired [him] to go for the music major,” he said.

Lin said he plans to double major due to his passion for both music and biology. In the piano performance major, he will take lessons from a professor while also playing chamber music in small groups. Though it is currently uncertain due to COVID-19, the major usually allows for many performance opportunities in the greater Chicago area.

Senior Lily Yang is also pursuing a similar path. She hopes to attain a dual degree from UC Berkeley that couples music with another major.

“My parents were the ones who got me into playing piano when I was young,” Yang said. “I’ve grown to enjoy playing it, and it’s definitely something I can see myself doing in the future.”

Her interest in piano bolstered during high school after being inspired by the skills of her teachers and peers. She surrounded herself with talented individuals, which she believes led to a significant increase in her own abilities. This has opened up many opportunities to her, such as in playing alongside the Saratoga Symphonic Orchestra.

According to Yang, the future music career she sees herself pursuing ranges from being a professor to working under music-related companies like Spotify.

“Music has helped me with college applications, meet a lot of people and make friends, when I perform and compete,” Yang said. “It’s a huge part of my life.”