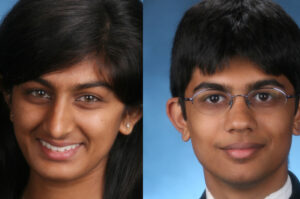 Malika Kumar is the salutatorian for the class of 2010. Ashwin Siripurapu was recently named the valedictorian.

After four years of taking rigorous classes and balancing schoolwork with other activities, senior Ashwin Siripurapu was recently named the valedictorian for the class of 2010, and Malika Kumar was named salutatorian.

After four years of taking rigorous classes and balancing schoolwork with other activities, senior Ashwin Siripurapu was recently named the valedictorian for the class of 2010, and Malika Kumar was named salutatorian.

“I think it represents, being at Saratoga, a tremendous amount of hard work to have the top two GPAs in the senior class,” said principal Jeff Anderson. “It’s pretty impressive given all the great students we have. To be the top two, they’ve obviously put in a lot of time and dedication to do that well.”

Siripurapu and Kumar both had GPAs of over 4.5. Both have taken numerous AP and honors courses over the years.

“I haven’t really taken [AP and honor classes] with the goal of getting a really high GPA; that really isn’t the reason that I take the classes,” said Kumar. “Any classes I’ve taken is just because I’m interested in it, and I want to take a level of a class that will really challenge myself.”

The seniors were thrilled to hear the news. They said being crowned valedictorian and salutatorian was not their only incentive for working hard in school.

“Honestly, I couldn’t believe it at first,” said Siripurapu. “Secretly, I had been hoping for this, but I didn’t want to get my hopes up. Even now, I still have to replay that conversation in my mind to convince myself that, yes, I really am the valedictorian.”

Kumar said, “I’m still in shock. I totally wasn’t expecting it, so it came as a really big surprise, but I’m really happy to know that my efforts paid off.”

In addition to keeping up their grades, the two also participate in multiple extracurricular activities. Siripurapu is involved in the marching band, math club and Spanish club, while Kumar interns at two research labs at Stanford, participates in science fairs, plays violin in the orchestra and volunteers at Good Samaritan Hospital. She was also involved in student government for three years.

“Somebody on the outside might think, they’re just these little machines that go home and study all night long and don’t do anything else,” said Anderson, “but when you get to sit and talk with them and get to know them a little better, it says even more about Saratoga High School, that we have a lot of great students that also are pretty well rounded.”

While earning the top GPA obviously shows his skills in all areas of learning, Siripurapu still enjoys some subjects more than others.

“Coming in from middle school, I had this idea that I was totally a math/science person and that English was not my cup of tea,” said Siripurapu. “But later, I realized that English classes were interesting, challenging and, yes, fun. Nevertheless, I remain passionately interested in the sciences.”

Although the valedictorian and salutatorian are both determined solely by GPA, assistant principal Brian Safine extremely appreciates their great personalities.

Said Kumar, “It’s kind of one of those things where it could have been a margin of 0.00001, so I don’t feel like I’m better than anyone else. It’s nice to get the honor, but I think I’m still the same; I’m still a student, just one of those who has worked hard and is glad that her efforts paid off.”