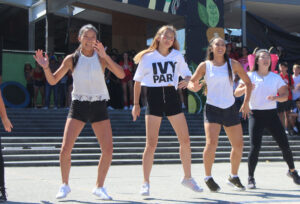 Seniors pump up the crowd during their final Homecoming Quad Day on Sept. 21.

As senior Ferennie Liu strutted down the quad steps with  her flag held high during the seniors’ Quad Day performance last Friday, it was impossible to miss her confident smile. Joined by senior Color Guard members, Liu was determined to make every second of the Class of 2019’s last Homecoming count.

Liu and the rest of the seniors’ hard work paid off when it was announced that they had won the annual competition. They had 1,538 points, while juniors were second with 1,515 points, followed by freshmen with 1,271 points and sophomores with 1,207 points.

In anticipation for their final Quad Day, the 275 seniors participating started preparing decorations as early as a month before the performance, and it was apparent that the seniors’ experience gave them an upper hand over the rest of the classes.

Senior class representative Jennah El-Ashmawi said that the Class of 2019 was fully aware of the high expectations that came with the previous three years of experience, and as a whole, they were excited to put on a memorable “Alice in Wonderland”-themed performance.

El-Ashmawi said that team management was a large part of the successful decorations. With the help of members of the robotics team, the seniors were able to complete more complex decorations, including spinning teacups and a rotating head on the Cheshire Cat.

“We had most people work on decorations for the hallway, and then we had a smaller team working on the arch,” El-Ashmawi said. “Having specific people do specific things got our decorations done efficiently.”

Choreographers also felt the pressure to create original and entertaining dances, and combined with the work necessary for college applications, time management was essential to putting on an unforgettable show.

After struggling with time management mistakes as an underclassman, Liu, who choreographed the Color Guard dance, was adamant on starting practices early to avoid overlap with other commitments.

Even then, Liu still struggled with balancing homework and Homecoming practices.

“There were times where I’d get home at 12 because of dance and guard practices,” Liu said. “And then I’d realize that I still had a ton of homework to do even though I’d felt like I had been on top of everything the whole day."

For Liu, the end result was worth the endless hours spent practicing on the upper field.

“We put in the time and the effort, and I think we really pulled through on our last Homecoming,” Liu said.

Also, stunt dance choreographers Amy Tang and Francesca Chu decided to hold late night practices, often from 9 to 10:30, in order to accommodate to the schedules of the 21 students in the dance. Though they started teaching choreography three weeks before the performance, the two ended up changing the mix on Monday of Homecoming week, four days before the performance. However, the stressful days that ensued were well worth it considering the stellar performance.

Senior Enzo Coglitore sprinted out during the All Boys’ Dance to recreate a move they had done freshman year, where Coglitore mimed pulling the rest of the dancers towards him while the boys crawled on the ground, reaching up at him.

“[Senior Justin] Chao and I were talking about ideas to make the all-boys dance legendary and we knew that we wanted to tie it back to freshman year,” Coglitore said. “So we decided that I would run out and do the move again.”

At the end of the show, Alice, played by senior Sasha Pickard, reflected on the seniors’ journey through past Homecoming themes — Atlantis, Cars and Back to the Future — ultimately realizing that there was no place she would rather be than Saratoga.

For the seniors, the hours put into Homecoming preparations over the years culminated in a memorable finale.

“Homecoming is such a grind, but I really enjoyed those late night dance practices hanging out with everyone or painting and listening to some sweet jams,” said El-Ashmawi. “It’s our last year of high school and these are the type of memories that I will never forget.”