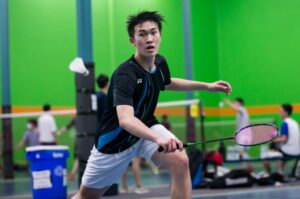 Senior Adrian Mar glanced up at the scoreboard as the seconds ticked down at the Cabarrus Arena in North Carolina. Following a 21-15 victory and a 21-19 loss, Mar was playing the final game to determine whether he and Gunn High School senior Natalie Chi, his mixed doubles partner, would be able to advance to the quarterfinals of the 2021 U.S. Junior National Championships, which took place from June 21-28.

With only a couple of minutes left and the score nearly tied 22-21, Chi and Mar scored the winning point, securing their path to the quarterfinals. Later, the duo’s efforts resulted in a silver and bronze medal for mixed doubles and doubles, respectively.

“We decided to take it one point at a time and change our strategy to slowly push our opponents to move to the far edges of the court,” Mar said. “Intense matches like these ones are my favorite and allow me to perform at my best, so I decided to pick up the pace a little bit and we were able to secure the win 23-21.”

A month after his post-pandemic debut at the U.S. Junior National Championships, Mar was invited to attend the 2021 U-19 Pan Am Junior Championship in Acapulco, Mexico, from July 19 to 23, where he won a gold medal for doubles with Monta Vista High School Class of 2021 alumnus Aaron Low.

“I was really happy about it, especially after coming back from Junior Nationals,” Mar said. “I was pretty disappointed that I couldn’t come back with the gold that time, so winning first place after the initial loss was really exciting.”

The last time Mar attended an official badminton tournament was in 2019 for the Badminton World Federation World Junior Championships in Kazan, Russia. Mar noted that the competitive environment post-COVID-19 was significantly different from when he last played.

Due to the different restrictions in North Carolina, which has one of the highest populations of the Southeastern states, players were required to wear masks and boots and follow social distancing and other COVID-19 protocols.

“The atmosphere was definitely very different from before,” Mar said. “Players weren’t allowed to talk to too many people; it was more like we were just going to the venue to play and then leave. It wasn’t bad, just different.”

Even though he didn’t place during that competition, Mar said it helped set the stage for his current success.

“I was really young compared to all the other competitors at the time, so I didn’t really have high expectations going in,” he said. “Although I didn’t get any results, I felt like I really learned a lot from that tournament. The same tournament will be held this year and I hope to do better this time.”

Mar began playing badminton at age 7 and has been playing competitively for over eight years. He trains at the Campbell Bintang Badminton court and currently plays with Chi for mixed doubles and Troy High School senior Henry Tang for doubles. He has previously played and won against renowned junior players from around the world, including Joshua Yang, a top player in the U.S. junior stage. Mar is also a player on the school badminton team and plans on continuing this spring. His former doubles partner was the class of 2021 alumnus Ryan Hsiao.

As a result of his extensive training, Mar has been able to build strong friendships with his partners both on and off the court.

“Playing with Adrian has been a great experience since we both have similar mindsets when it comes to badminton and we always try our best to fight for every point during our matches,” Chi said. “We have a lot of trust in each other’s abilities.”

Despite his successes in badminton, Mar has decided not to pursue the sport at the collegiate level, saying that even though “being recruited would be nice, there are only a few schools that offer scholarships, and those schools haven’t really caught my eye.”

Mar instead hopes to keep his academic and badminton careers separate from each other, opting to focus on personal goals such as one day competing in the Olympics. In the meantime, he hopes to gain familiarity with the international scene after the college applications process is over. He plans to join a college team or find a nearby facility to train with other players.

“A big thing I’ve carried with me through my eight years of competitive badminton is how to win from losing — how I learn from my losses and build off of them to improve in future matches,” Mar said. “Through it all, I am most grateful for my parents and all my different coaches for supporting and guiding me throughout this journey and I am ultimately very proud of how far I’ve come.”