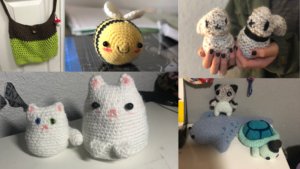 Permalink
Senior Miranda Yee has made several stuffed animals, bags and more to help her relax.

Now, as a senior, Yee has continued to explore this hobby in her free time. Yee learned how to crochet, a craft where a hooked stick is used to string loops through another string, in the summer of 2020 at the start of the pandemic.

Before picking up crocheting, Yee first attempted to knit with her sister senior Carina Yee as a child, but both siblings gave up when they were younger.

Yee later grew to love crocheting because of the variety of creative pieces she could make. Previously, Yee made rabbits by knitting square pieces of cloth, but as she tired of the simple activity, she found crocheting to be more interesting. Her most recent piece was a sweater for Halloween, inspired by a TV show called “Gravity Falls.”

Yee typically steers away from large, time-consuming projects like sweaters. Instead, she typically makes “amigurumi,” small animals crafted from crocheted yarn and filled with stuffing. Despite the small size of the pieces, which are roughly the size of an orange, each one is still highly time consuming.

“My first project took me five hours, and it was really small,” Yee said. “Now, I’m really busy with schoolwork and college apps, so I don’t crochet as much, but during the Christmas season, I normally make a few pieces per week.”

One aspect of crocheting she enjoys is how she no longer needs to buy gifts for people. Yee currently spends one or two hours on each small amigurumi, gifting these pieces to her friends or teachers while keeping a few for herself. For example, she crocheted a white cat for Media Arts Program teacher Mike Davey and a small plushie for math teacher Jennifer Mantle.

Yee often finds inspiration from TikTok and Instagram reels, where people post short instructional tutorials on how to crochet. She gets most of her supplies such as yarn and crochet hooks from Michaels, as the store allows her to stack coupons and save money.

Yee currently runs the Crafting Club, which meets in Room 408 on Red Day Thursdays. She plans to start a separate group dedicated to crocheting.

“I’m hoping to gather a small group of people who are interested in learning to crochet,” Yee said. “I think that would be really interesting.”

After starting the hobby two years ago, Yee has seen its benefits.

“Crocheting is really relaxing and repetitive, and I love it because you can make anything you want,” Yee said.