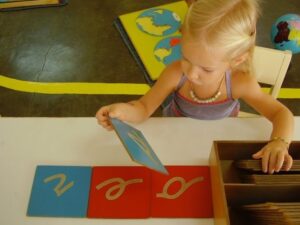 Senior Caroline Keogh’s kindergarten classroom didn’t look like the ones most people recall from their childhood.

Instead of books, computers and paper, it contained shelf after shelf of sparse, colorful, carefully organized materials: a tower of smooth pink cubes in descending sizes that fit perfectly into a box, maps made out of wooden puzzle pieces, long bead chains and trays of letters cut out of sandpaper. Rather than tight rows of desks and tables, children and teachers alike sat cross-legged on cloth mats over the outline of a single, large oval painted on the floor.

This type of classroom, known as a prepared environment, is an integral part of Montessori education — one of dozens of educational systems and theories that have gained prominence in the past century.

Keogh’s family relocated to Beijing due to her father’s work. Her parents enrolled her in the International Montessori School of Beijing, a bilingual primary school that serves both expatriate and local students from preschool to 8th grade. Keogh, whose family was a part of the growing expatriate community in Beijing, attended the international school until 5th grade.

Keogh, who has lived in Saratoga since middle school, received a radically different early childhood education than most of her current peers. Yet, she said she has assimilated well into the U.S. public education system over the years, and her experiences with different types of schooling reflect the resounding myriad of education in the world today.

Keogh’s school followed the Montessori curriculum — a pedagogy developed by Dr. Maria Montessori that focuses on individual, holistic learning during crucial periods of a child’s life based on Montessori’s years of observation. It revolves around the ideology that children must be intrinsically motivated to learn, and they learn the best with freedom of movement in a prepared, open and accessible space.

Keogh’s school allowed students to learn at their own pace rather than follow prescribed daily lessons as she would have in a conventional school.

“We were never graded on our work or [given] exams,” Keogh said. “I think the Montessori way of learning was so much better because we focused more on absorbing and mastering the material than trying to learn it as quickly as possible, take a test and move on to the next subject.”

According to the National Center for Montessori in the Public Sector, more than 3,000 Montessori schools operate in the U.S. Of them,  560 are public. The total number of Montessori schools across the world exceeds 20,000. They are growing increasingly popular in European and Asian countries as a more holistic alternative to traditional methods, but are not as common in the U.S.

Getting a Montessori elementary school education, according to Keogh, has continued to shape her, even when she moved back to the U.S. At first, it was difficult for her to acclimate to competitive and academically rigorous Saratoga schools, which were vastly different from the relaxed and self-paced environment she knew in Beijing.

“I was caught off-guard at first, with the idea that all of the kids were expected to move through the curriculum at the same speed,” she said. “I think it’s a completely unrealistic expectation, and kids internalize those ideas. And when they get older, we see things like cheating scandals because people have grown up only caring about the grades, not what they’re learning.”

She believes that it would be beneficial for U.S. public schools to incorporate more elements of Montessori teaching into their own curricula. For instance, Montessori’s emphasis on understanding and learning over results and scores is something Keogh feels would help change the toxic academic culture in schools like Saratoga High and let students have healthier learning experiences.

Keogh’s Montessori experience wasn’t just focused on academic growth — the emphasis on developing social-emotional awareness, learning practical skills, forming close relationships with peers and teachers and diversifying both the school and the city all played a part in the unique Montessori education Keogh and her classmates received.

Keogh noted that her school was diverse in both ethnicity and nationality — many of her friends were from Canada, Beijing and the U.S. However, she noted that most of the students came from affluent backgrounds.

Nevertheless, living and attending school in Beijing also gave Keogh the opportunity to interact with people from different walks of life and understand more about the world outside the U.S. Additionally, her time in Beijing sparked her love for the Chinese language from an early age — Keogh is now fluent in Mandarin.

“I think one thing people say about Saratoga is that we live in this bubble because most kids have lived here their whole lives,” Keogh said. “They feel safe in this bubble and they don’t really know or understand what happens in the rest of the world. I just feel like having lived abroad and having received the education I did, I’ve seen a little outside the bubble, which is such a valuable experience to have.”