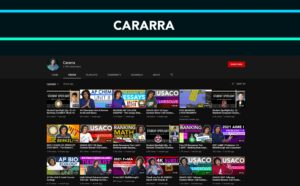 The summer after sophomore year, Rohan Kumar noticed that there weren’t many resources guiding STEM students through the maze of science Olympiads and decided to start his own YouTube channel to fill the void.

Inspired by his favorite bird — the northern crested caracara — Rohan chose to name his channel Cararra. What began as a personal project where Rohan shared helpful mnemonics and problem solving strategies has now turned into a full-blown YouTube channel, with nearly 5,000 subscribers and an array of videos on contest walkthroughs, AP crash courses and extracurricular reviews. Beyond just a YouTube channel, Rohan has created his own Discord and Reddit servers to help boost viewer engagement and community growth.

The popularity from his YouTube channel has garnered much attention among the Saratoga student community, especially because so many are interested in doing well in STEM academic competitions like USACO (computer science), USABO (biology), USAPhO (physics), and AMC (math).

“I kept the channel secret initially, and then I got some all-caps, very confused texts from my friends who found it by searching up ‘Last minute F=MA tips’ or ‘USACO,’” Rohan said. “Earlier this year, during the first CS club meeting, a freshman yelled out, ‘Wait, you're Cararra!’ so I guess middle schoolers watch my videos too. It turns out that basically everyone in the middle school math club knows about my channel now.”

Rohan is unsure whether he will continue the channel to its current extent at UC Berkeley, where he will be studying Electrical Engineering and Computer Science and Mechanical Engineering, noting that it does take a significant portion of his week to create and upload videos regularly. He records his videos using a Nikon DSLR and edits his videos using Premiere Pro. According to Rohan, since the average video takes around one hour to record and two hours to edit, he tries to record on the weekends, and upload videos twice a week.

Still, the positive feedback he’s received means that he hopes to maintain the channel while he focuses on college. He’s curious how much he can grow it. At the moment, Rohan is exploring the option of starting livestreams and AP Crash Courses.

For many students, Cararra has become a valuable resource for Olympiad prep.

While many are surprised by Rohan’s teaching proficiency, he chalks it up to hard work and practice.

“I've been doing math and science competitions since middle school, so I've self-studied and learned a lot of advanced concepts in math, computer science, biology, physics and chemistry,” Rohan said. “In terms of teaching, even though I did have the knowledge, I was really, really bad at explaining at first. Only after about a year of making videos, I learned how to slow down, enunciate, and actually make my teaching understanding and entertaining.”

For Rohan, the biggest surprise out of his YouTube journey has been how little money he made: around $200 monthly for nearly 30 hours of work. Though he doesn’t make videos for the sake of money, the amount was still shocking.

“I didn’t know it would be that little, but I will take less than minimum wage over nothing any day of the week,” Rohan said.

One side benefit of the endeavor has been an improvement in his public speaking.

“You can quite literally see the improvement just by comparing my videos from a year ago to now,” he said.

Rohan said that he’s not naturally entertaining, but creating videos regularly, trying to appeal to an audience and finding ways to create a community has taught him how to inflect, tell jokes and present in an interesting way.

“I’m now super comfortable presenting at club meetings and talking to people. Running this channel has turned me into an all-around better presenter and less awkward person,” Rohan said.