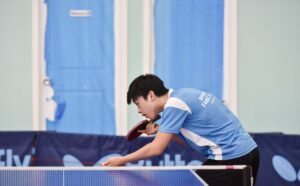 Senior Henrik Zhang prepares to serve in a match at the Spartans Butterfly Open in Santa Clara on June 11 this past summer.

Senior Henrik Zhang arced the small white ball across the table, whizzing past the net by mere millimeters. He shouted triumphantly as his opponent returned the shot too wide, ripping the ball just past the edge of the table and concluding a hard-fought 23-ball rally.

Even in a final match of the U-17 National Table Tennis Team Trials — one of the most critical matches in his entire career — Zhang couldn’t help but pause to savor the moment and his love for the sport.

“Even though my opponent and I were running around the table, ripping wide shots against each other, I wasn’t even thinking about being tired,” Zhang said. “I was just like, ‘Yo, this is fun.’”

Zhang went on to win the match, ultimately finishing the tournament in 5th place with a 7-5 record and qualifying for the eight-member national U-17 team.

The tournament, held in Pleasantville, N.Y., from June 18–21, matched top players nationwide. Competitors were first split into several groups, where they played in a round-robin format; winners from each group advanced to a final stage, and competed in another round-robin for national team qualification.

Zhang estimates he has placed in 100 events spanning 55 tournaments in his career, winning around $5,000 in prize money. Although most of the tournaments he participates in are regional or local, Zhang has also traveled to places like Florida, Las Vegas, North Carolina and New York. He is currently ranked 68th in the nation among all males and 11th among those under 17.

Zhang’s recent achievements have been a result of practicing table tennis consistently for almost nine years. He began playing when he was just 8 after his father, an avid recreational player, pushed him to start playing the sport. Initially, despite enjoying the sport and joining the Spartans Table Tennis Club (STTC) in Santa Clara, he lacked the motivation to compete in tournaments.

“Objectively, I’ve been pretty bad for most of my career until a few years ago,” Zhang said. “In my first tournament, I played pretty badly and probably got eliminated in the first round.”

Rather than getting discouraged by such performances, Zhang instead learned to use these failures as an opportunity to analyze and focus on areas of improvement. He dedicated himself to chasing higher caliber players , especially Nikhil Kumar, a fellow student at STTC and 2020 Olympic table tennis team member.

“I was highly motivated,” Zhang said. “I literally taped a picture of Nikhil’s face on the bottom of my paddle as a reminder to work harder whenever I saw it.”

For Zhang, his main goal is to increase his playing speed as his extensive table tennis experience has allowed him to develop a solid foundation in fundamental techniques. He attributed much of his success to his physical gameplay — footwork, strength and ball placement — which he developed through rigorous summer training regimens.

In 2018, Zhang trained for three weeks at a table tennis base in Hubei, China — a huge gym devoid of air conditioning, crammed with over 100 players around or above Zhang’s skill level. Daily playtime often exceeded eight hours, with two to three hour breaks for lunch and dinner. Players adhered to a strict training schedule, consisting of running, footwork and fundamental drills. For example, tables were combined together so that players had to cover double the usual distance.

Despite being the only American in a gym of Chinese players who were in training to qualify for the Chinese national team, Zhang experienced a surprising feeling of belonging.

“Training in Hubei was really worth it because it showed me how pros actually practiced compared to me,” Zhang said. “Table tennis in China is a completely different thing than in America; they can actually get into universities with the sport. They treat it very seriously.”

Inspired by the professional training there, Zhang said he applied some of their principles to his own training — in particular, their focus on meeting particular goals at each practice. Zhang tends to target speed rather than strength or reaction time, prioritizing exercises with a jump rope and agility ladder over strengthening workouts like going to a gym.

“I go into training with a certain mindset every time: This is what I’m going to work on today, and this is all I’m going to focus on,” Zhang said. “I feel like if you practice one thing first, and you keep on building on top of that, then it’ll be better than doing everything all at once.”

As his skills have become increasingly polished, Zhang has started to appreciate the nature of the sport on a more personal level as part of the “mental game.” Zhang said he used to anticipate shots immediately before receiving it, and reacted based on the angle of his opponent’s paddle

Now, Zhang has grown to enjoy solving these positional questions by predicting his opponent’s shot patterns further in advance, either through watching videos of their previous games or identifying trends among the tactics they used in previous points.

“It’s sort of like a game of chess — you and your opponent each constantly ask and answer like you how you return a certain ball and you have to find different solutions as to how you would play it so that you can be playing in an advantageous position,” Zhang said. “I like solving puzzles, and being a curious guy myself, I like finding the answers to everything.”

Even though much of his journey has depended on his own motivation and desire to improve, Zhang recognizes that he has received a lot of help to get to where he is now. He acknowledged his coaches — Tian Ye, Tao Wenzhang and Sean Lee — who have helped him in establishing a solid foundation and teaching him the techniques needed to reach his current level. He also credited his father with introducing him to the sport and his constant encouragement.

Although Zhang did not meet his goal of qualifying for the 2020 U.S. Olympic team, he still plans on playing table tennis beyond high school and refining his skills, especially if his future university has a table tennis program.

“Even on a day-to-day basis, I strive to improve even in the smallest way — to never be complacent with the status quo and always continue to improve,” Zhang said.