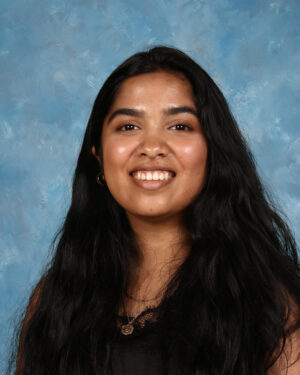 Senior Urmila Vudali learned of the dangers of microplastics in the environment as a sophomore taking Chemistry Honors with teacher Jenny Garcia and as a junior taking AP Environmental Science teacher Kristen Thomson.

Vudali decided to get involved in environmental-related projects and organizations such as the Santa Clara County Youth Task Force, The Tech student board and the Silicon Valley Youth Climate Action, which became a stepping stone for Vudali to grow her passion for teaching about the dangers of microplastics and environmentalism.

Eventually, she sought the help of District 5 Supervisor Joe Simitian to draft a proposal to declare Sept. 14 officially as Microplastics Awareness Day in Santa Clara County.

For Vudali’s efforts, she was recently awarded a Certificate of Recognition from Assemblymember Evan Low’s office.

“It was already really surprising to me that Santa Clara County wanted to listen to what I had to say, and gave me the resources to do what I wanted to do,” Vudali said. “To have something on the state level of the California Assembly is also super incredible.”

Microplastics have two main categories: primary and secondary. Primary plastics start as small plastic pellets designed for commercial use, while secondary plastics come from the degradation of larger plastics, such as water bottles. Both pollute the ocean’s ecosystem and hurt the environment.

To commemorate Microplastics Awareness Day, Vudali brought together four renowned scientists, Dr. Scott Coffin, Dr. Holly Wyer, Dr. Grace Lee and Dr. Rebecca Sutton, to host a webinar that discussed the health concerns of microplastics. The scientists were all chosen due to their involvement in research projects, local projects and state government, all to help decrease the use of microplastics. The webinar was hosted with Santa Clara County and about 80 citizens joined.

“I hosted the webinar because I felt like the microplastics issue was not being talked about enough,” Vudali added. “There are so many different facets to plastic pollution that I feel like people overlook microplastics.”

The webinar also discussed state actions on eliminating pollution by assessing the causes as well as possible preventative measures that people can take to decrease their microplastic intake. While the event was successful in raising awareness about the dangers of microplastics, Vudali said that COVID-19 hindered the impact of the webinar.

“If it weren't for the pandemic, we could have introduced legislation that could decrease single-use plastics, promoted certain lifestyles and more,” Vudali said. “The pandemic was an unfortunate background. I was met with some trouble contacting and confirming speakers.”

Vudali is still interested in pushing for further legislation in the future and plans to major in environmental science in college, which has pushed her to seek out more environment-related opportunities.

Thus far, she has hosted and planned numerous fundraisers and panels, such as the Youth Homelessness Drive and a panel that emphasized the importance of STEM education for children. She also heavily focuses on activism for environmental issues by planning a National Geographic Panel and Sustainable Food Panel as independent projects.

“It’s important to me because I feel a sense of dread and hopelessness for our future. Honestly, it’s hard to envision life after college for our generation given how poorly we treat the planet,” Vudali said. “Getting involved and advocating helps me relieve that stress and gives me hope that things will change.”