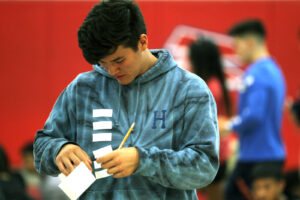 During Break Down the Walls in October, students went through a variety of activities designed to increase their social and emotional intelligence.

In schools across the country, a growing movement is recognizing that the social and emotional well-being of students has a major impact on their ability to succeed in the classroom.
At Saratoga High, the Social Emotional Learning Team (SEL), a group made up of four staff members and six students, has been seeking to create a safe environment and foster connections.
SEL functions “to create a more sensitive, courageous and connected learning community empowered with the tools to promote awareness and address interactions, issues, policies and procedures that undermine individual potential and achievement,” according to its mission statement. SEL meets about twice a month, and students and teachers may contact assistant principal Kerry Mohnike for the team’s schedule if they wish to join meetings.
“Giving teachers and students the opportunity to focus on social and emotional wellness helps establish that those things are just as important as academic success and that you can’t be successful without social and emotional care,” English 9 teacher Susanna Ryan, one of four staff members on the SEL team, said.
The group began almost seven years ago after some staff members, including health teacher Amy Obenour, attended a workshop called Passageworks about enhancing academic performance through social and emotional skills.
Originally, SEL was formed to create an interdepartmental connectivity network for staff members and eventually, its goal transformed  to create devices and techniques for teachers to increase a sense of belonging in the classroom. Three years ago, the District Wellness Committee for staff members and the SEL team for classroom work and students formed.
SEL contains subcommittees for various projects, including this past October’s Breaking Down the Walls week and Humans of Saratoga High (HoSH), a Facebook page that profiles people in the school community, and they analyze the social impact of activities during the month. Some of these subcommittees work with other groups on campus such as Outreach Commission on their assigned projects.
Along with focusing on social and emotional skills, the team also works on promoting equity throughout school. They worked with the Epoch organization last year, a team that aims to challenge inequity by changing the way people engage with others on a daily basis.
“Equity work is part of an umbrella which is social emotional learning,” Mohnike said. “Going to a school that you feel connected to because that school understands your culture and your background and that school respects that and includes it in the curriculum and activities is also a part of what the SEL team wanted to be connected to.”
The equity and connectedness that SEL promote are evident even within meetings. Senior Iman Laique, the student liason for the Leadership class, said that meetings help staff and students see each other as people.
“It’s a very safe environment, and I’ve had a good experience with it,” Laique said. “You never think that your teachers are actual people. You think that they’re people that have everything figured out, but that’s so not true.”
Although connectedness is not quantitatively measurable, SEL analyzes the results of their activities through surveys and observation.
Crediting a staff activity created by SEL at the beginning of the school year that was similar to Breaking Down the Walls, Mohnike said that “[staff] were happier in the halls, and they were meeting and talking to people in ways they had never done before.”
Mohnike said in the past seven years she has seen the team make Saratoga High a “kinder, more connected place.”
Mohnike wants students to develop emotional skills that are transferable to the world and help them be successful in every environment.
“We are trying to help students develop these soft, soft skills and that is understanding the importance of connection, the importance of respect,” Mohnike said.
Though the team is seven years old, it remains relatively unknown on campus. Laique hopes to change that through more student involvement and outreach through activities.
Although she considers Breaking Down the Walls and the weeks following to be significant steps toward more compassion on campus, Mohnike said most students come to school with a strong social and emotional skills.
“There’s a goodness about students anyway, so I’m hoping we don’t need to have an opportunity to make it shine,” Mohnike said. “I just want continual growth.”
The members of SEL are seniors Anuj Changavi, Usman Khan, Hannah Chang, Iman Laique, Jennah El-Ashmawi and Samyu Iyer; juniors Krithi Sankar, Siyona Suresh, Connie Liang, Sarah Hess, Connor Oaklander and Emma Hsu; sophomores Allison Hartley and Lauren Tan; freshman Nicole Lu, and staff members Kristofer Orre, Marina Barnes, Brittany Duffy and Susanna Ryan.