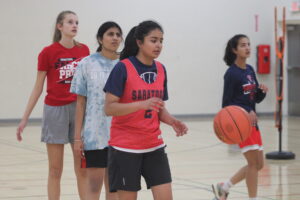 basketball
Hoping to improve on their strategies and tactics, the team is hoping to make it further in CCS this year.

Recap: The team lost 60-49 to Aptos at CCS quarterfinals.

Though the Falcons remain in the upper league, the upcoming season will be a challenge with only three seniors on the varsity team due to the graduation of key players Naomi Mallik and Amarangana Tyagi.

“They were good rebounders and playmakers for us, so it’s going to be tough without them,” sophomore guard Urvi Iyer said.

Despite only six out of 11 players being upperclassmen this year, the team’s chemistry is strong, Iyer said. The team is also focusing on building a more resilient defense, which sets up a stronger foundation for their offensive plays.

“Our offense depends on how our defense is,” Iyer said. “If we’re strong defensively, we can push the ball and get good looks on offense.”

In order to improve on their defense, the team has been practicing a drill called the “Shell Drill” in which the team splits into offense and defense, practicing communication to keep the ball away from the net.

With good team chemistry and an ultimate goal of making it further into CCS, the team looks forward to a successful season.

“It doesn’t matter how slow we go,” said Iyer. “As long as we keep practicing, we’ll get to where we want to be.”