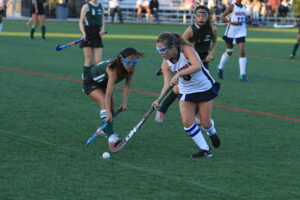 Last season, the team was eliminated from CCS after they tied with Los Gatos during the playoffs. This year, the team feels optimistic about the upcoming season due to the new arrangement of the league. Although the Falcons remain in the El Camino division, some of the better teams such as Mitty and Saint Francis have been moved to the De Anza division, leaving the Falcons with better chances at victories.

With only three seniors, the team aims to sharpen its new blood, working on the basics and gaining new skills.

“Originally I was nervous about keeping up, but the coach is good at getting everyone at the same level and running drills that people can participate in,” said sophomore Allison Ha, who joined varsity this year.

They focused on team building and dynamics last season and hope to carry this into the upcoming year with a full roster,.

“I think the season might be rough at first because it’s a young team,” junior goalkeeper Simrita Advani said. “It’ll be a rebuilding season, but I think we can definitely be on top of our league this year.”