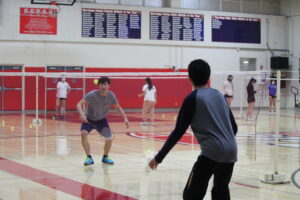 Glenn Liang (11) and Ferrano Liu (12) play badminton against each other in practice.

After losing 16-14 against Milpitas on April 5, the badminton team was determined to redeem themselves in their rematch the same day. After analyzing the weakness of the opposing team prior to the game, the coaches and captains made quick adjustments in the partnerships so each player’s skills would be better complimented. Their efforts paid off, as the team won 16-4 in the rematch.

The badminton team, led by coaches John Li and Calvin Blocker, wrapped up their season on April 23. Despite COVID-19-related challenges, they finished fourth out of seven teams in the league with a record of 5-7, the best they’ve performed in recent years. The team captains were junior Adrian Mar, junior Enoch Jung, junior Connie Lin and senior Max Gendeh.

In spite of the difficulties of playing during a pandemic, Jung said he is happy with the outcome of this season and attributes their success to the optimism the team brings to their practice and games.

The team had lower participation this year, June said, mainly because many seniors, who had already completed their P.E credits and didn’t want to play with a mask, chose not to participate. Due to a lack of players, especially on the girls’ side, the team began all the matches down 8-0 in a best out of 30.

“We came to each match with an underdog mindset, and made sure that everyone who played did their part so we could climb the 8-point deficit,” Jung said. “We also had pleasant surprises and young stars from our freshman class.”

One of the key additions to this year’s team was freshman Sannidhi Boppana, who joined with four years of badminton experience under her belt. Jung deemed her the best women’s player on the team.

Boppana said the team’s mentality played a large role in dictating the results they saw in each game.

“Mainly just focusing on every point of the game is what led us to our victory, or sometimes even a loss, but we tried our best and I think that's what matters the most,” she said. “I think the season was a great bonding experience, especially for me since this was my first season and I cannot wait for more!”

Sophomore Evan Oaklander got the chance to be on the varsity team because he said many of the talented players the previous year had graduated.

“It was pretty challenging since I was on the lower end of varsity players, but I was still able to get a few wins. I think I improved a decent amount,” Oaklander said. “The season felt pretty fast since we only had one practice in between games.”

While there were only a few practices, Mar is happy with what the team achieved in his first year being captain.

“The team performed really well this season and we won a lot more games than we have the past few years,” Mar said. “It was a fun experience being a captain and things went smoothly because the coaches and other captains were easy to work within planning and practices.”

Games against Wilcox, Monta Vista and Milpitas were also postponed due to athletes on the opposing teams testing positive for COVID-19. Despite the challenges they faced this season, Jung said that the team is proud of how the season went

“We battled through games we thought we wouldn't win and overcame challenges such as lack of participation,” Jung said. “Everyone took their individual match very seriously, and no matter how easy the game seemed, we still tried to finish the job.”