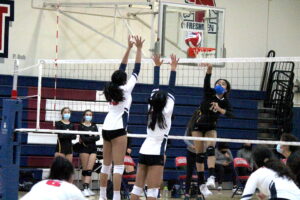 Senior Ria Purisai and sophomore Lisa Fung jumped up to block the hitter in a game against Wilcox on April 9.

During the girls’ volleyball season, which lasted from March 22 to April 23, athletes could be found at the main office swabbing oral samples. In addition to required triweekly COVID-19 testing, the team also faced inconveniences such as disinfecting the ball between every point and the loss of the traditional coin toss in their condensed and delayed season.

The team was coached by Brendan Wang, who usually only coaches boys’ volleyball, but shouldered the responsibility of coaching the girls when coach Steve Chiou left the position due to family matters. The athletes overcame these hurdles and finished fourth in the league with a 6-4 record.

“We won the games we should have won and put up a good fight in the games where we were underdogs,” Wang said.

Wang was most impressed by the team’s hitters such as senior co-captain Ria Purisai and junior Jordyn Sin; generally, when a hitter gets set frequently, their efficiency goes down due to exhaustion, but they were still able to maintain a high number of kills.

Throughout the season, however, Wang occasionally called timeouts for players to take a break because they got short of breath. It’s not something normally done by coaches, but it was necessary when players must wear masks, he said.

Another challenge the pandemic posed was the truncated season: The team only had two days of practice before they were thrown into their first game.

“There was so little time to perfect the things I wanted to work on, so I didn't feel like there was a point in changing what we were doing,” Wang said.

Specifically, he wanted to reduce the predictability and increase the flexibility of the team’s hitting.

The team’s co-captain, senior Hermione Bossolina, said that despite the season being only a month, she learned a lot.

“We had to bond really fast, learn how to play together and wash our uniforms often because we played around three games a week,” she said.

Bossolina said the team struggled with having fewer players. They lost five valuable players to graduation, seniors Karen Lei and Danielle Moon could not play due to COVID-19 concerns and senior Berry Bailey chose basketball over volleyball because of the overlapping seasons. Other players like Sin, sophomore Joanna Song and freshman Ariel Zhou had to juggle conflicting club and school seasons. As a result, players like sophomores Anika Koganti, Brooke Edwards and Victoria Prillwitz were on both the JV and varsity rosters, although they could only play for one team per day.

Despite the extraordinary circumstances of this year in which Wang had to coach girls’ volleyball for the first time, he was loved by the players.

“Coach Brendan came up with some very interesting plays that we've never done before,” said Bossolina. ”He gave us some new choices of plays to run, which everyone really liked.”

An example of these plays was when Wang decided to put in some variation to the team’s hitting in a game against Fremont. The new play he drew up had two players run across the court to confuse the opposing blockers’ vision, leaving a hitter wide open. The hitter, Purisai, got a clean kill.

Purisai, an outside, had played middle throughout her 7-year volleyball career, so Wang wanted to incorporate her skills into the play, she said. She found Wang to be really supportive, and fondly recalls the times he got mad at the referee for the team.

“It was kind of funny to watch — but not so funny when you then have to talk to the refs to calm them down,” she said.

Facilitating communications between the coach and the referees was one of the many duties Purisai took on as a co-captain. She also coordinated and reminded the players about COVID-19 tests, jerseys and the ever-changing schedule.

“Sometimes we didn't even know whether a game was happening until the day before, and sometimes the time would change 30 minutes in advance,” she said.

Contributing to the “mess,” as Purisai put it, was a game against Fremont that was canceled because they had a COVID-19 scare when a student not on the volleyball team tested positive and a game against Milpitas that was postponed because of delayed COVID-19 testing results. Additionally, there was the uncertainty of whether there was going to be an assistant and JV coach; however, Charlie Yi ended up filling this position.

Despite the game cancellations and postponements, Purisai saw significant improvements throughout the season.

“Our first game was kind of rough due to the lack of practice, but we got practice from the games and learned from our mistakes while we were playing,” she said.

By their last game against Wilcox, which was lost in the fifth set, Purisai found that the team was passing balls they hadn't connected throughout the season and running the middles more often.

“We played really well and we were super cohesive,” Purisai said. “I think we really came together at the end of the season.”