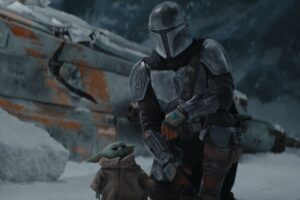 On April 26, 2019, crowds stampeded to movie theaters to watch “Avengers: Endgame.” The result was a massive worldwide conversation: geeking out over plot details, emotional responses and more.

Since the pandemic started, no major franchise has released a television show or movie, voiding pop culture of moments like “Avengers: Endgame.” That is, until now.

On Oct. 30, Disney+ released the second season of “The Mandalorian” to warm welcome across the globe. “The Mandalorian,” a show based in the world of “Star Wars,” brought with it the fanfare from times before COVID-19. More importantly, it brought back a much-forgotten feeling — normalcy.

“The Mandalorian” returns with its signature episodic, old Western-movie style but leaves many loose ends as of episode 2 of its new season.

“The Mandalorian” premiered last November with the launch of Disney+, which, according to the New York Times, had 73.7 million subscribers as of October. The show was a critical hit, receiving 15 Emmy nominations, including Best Drama. It was also a commercial success, spawning merchandise lines from both Disney and unofficial independent vendors.

Season 2 did not disappoint, bringing back the cherished planets and creatures that made “Star Wars” so famous. The Child — or Baby Yoda, as the internet refers to him — is back for more viral GIFs, and the Mandalorian, played by Pedro Pascal, is back to never take his helmet off. From Gamorreans to Tatooine, the season begins with endless callbacks that are sure to get fans talking.

The second season picks up right where the first ended, with the Mandalorian looking to reunite the Child with his kind. Still, the first two episodes of the season largely ignore the major cliffhangers that ended the first season, where the villain, Moff Gideon, narrowly survived using the Darksaber. Moreover, the season’s beginning hardly advances the overall story arc in any significant way.

For a show with such a large audience, it’s puzzling why Disney and Lucasfilm are choosing to progress the story so slowly. The show and “Star Wars” in general are slow, but “The Mandalorian” takes many detours and includes unnecessary exposition, occasionally crossing the line between meaningful content and boring filler.

Still, the show’s slow progression makes space for its episodic format and Western style. Both seasons are divided into chapter installments, with each being a largely self-contained story.

Some highlights of the season thus far include a fantastic performance from actor Timothy Olyvant as the Ranger and top-notch special effects on a krayt dragon and massive spiders. The stories of both episodes, too, were on par with those of season one, and “The Mandalorian” continues with its episodic excellence through its second season thus far.

The structure also allows for more character development between the Child and Mandalorian. Their paternal relationship also continues to be one of Hollywood’s few single-father storylines, a high-profile and important representation for men without traditional family roles.

“The Mandalorian” brings back the internet’s favorite new “Star Wars” duo for more exciting one-off adventures, while introducing new characters like Cobb Vanth. The show will also see the return of Cara Dune and Moff Gideon later in the season, as well as guest appearances from fan-favorite characters like Ashoka Tano, Boba Fett and Bo Katan, which is sure to drive up excitement as the show progresses.

Despite heavy character development and little story progression, “The Mandalorian” continues to be one of the best shows airing on television, and remains a fun treat to look forward to every week. The show is a return to the high-budget franchise entertainment that has become so rare in this global crisis, and the best is yet to come.