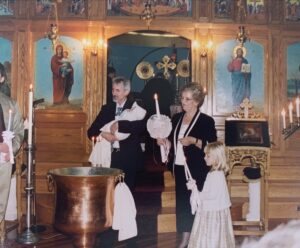 Photo by Courtesy of Anastasia Panidis
Held by her godfather, Panidis gets baptized at 4 months old, accompanied by her paternal grandmother and older sister.

Junior Anastasia Panidis sat on the bleachers of Archbishop Mitty High School’s gym during winter of her freshman year, listening intently alongside her peers as Father James, Mitty’s head priest, gave the students a sermon. Despite not necessarily believing in God, Panidis, who attended Mitty for her freshman and sophomore years before switching to Saratoga High School this year, loved the way Father James preached. As Father James wrapped up his sermon, the students recited a prayer in unison. Panidis mumbled the words incoherently and hoped for the best — a reflection of her thoughts about the prayer.

Panidis’s time at Mitty, a private Catholic high school, caused her to think about religion in a way she hadn’t before. Both the opinions she formed about Catholicism and her experience with the faith eventually prompted her to leave Mitty and enroll at SHS in the fall, but she was a changed person.

A family who cherish religion

When Panidis was 10 visiting her maternal grandmother in Italy, she noticed a portrait of Virgin Mary on the wall and asked her who it was. Shocked at her lack of knowledge, her grandmother smacked her, shouting, “How dare you!”

This incident, ingrained in Panidis’s memory, was one of many during her trip in which she felt pressured to subscribe to her grandparents’ Catholic religion. Her extended family always preached prayer as the solution to stresses and troubles, and her grandmother expected Panidis to be just as religiously devout.

At home, however, Panidis felt freer to explore religion and spirituality without the scrutiny of her grandparents, who are Orthodox Greek on her dad’s side and Catholic on her mom’s side. Though both her parents were raised as Christians, her mom is an atheist and her dad is agnostic. Her parents gave her the space to believe in whatever she wanted.

Panidis believes that distance from her grandparents along with freedom of thought in her household allowed her to make her own conclusions about the world.

Making the move to Mitty

When Panidis applied to Mitty during eighth grade at Redwood Middle School, she sought access to a better education, a private school experience and a space for her to flourish in ballet — an activity she had pledged her life to. One of her other priorities was to explore Catholicism and try to develop a personal relationship with God.

She didn’t consider herself particularly religious at the time; she believed in the idea of a God, but was skeptical whether her idea of God aligned with traditional Christian beliefs.

Still, she was interested in learning more about Catholicism. It’s a faith that’s not only close to her family, but has also had “a massive impact on history.” She believed immersing herself in it would bring her closer to the self-image she wanted to achieve.

“I was trying to become a good, Catholic, ballerina girl. I told myself I was going to get all As, and I was able to do all of that,” Panidis said.

During her freshman year, Panidis and her classmates took religion classes for 90 minutes two to three times a week. In this required freshman course, students studied biblical text and Catholic history and knowledge.

When she was younger, Panidis went to Christian and Catholic events with her family in Italy feeling as if she could not name or talk about God flippantly. However, the community at Mitty allowed a much more casual attitude toward Catholicism, which pleasantly surprised her.

Panidis remembers sitting in her first religion class and being shocked at how casually students and teachers talked about Jesus.

“At Mitty, it was like, ‘Let’s talk about Jesus today! God’s my best friend!'” Panidis said.

In particular, Panidis said she enjoyed learning about the Old Testament, as the stories were comforting and interesting “like bedtime stories.”

Despite enjoying her courses and activities, Panidis thought that Mitty’s disciplinary policies contradicted what the institution taught about God and Catholicism. The dress code, she said, was extremely strict and seemed to target girls: no shorts, no tank tops, no “extreme” makeup or piercings and dresses and no skirts falling more than 6 inches above the knee.

Panidis was also alarmed by Mitty’s strict policies on drugs and alcohol. During her first semester of freshman year, she walked through the hallway after class and saw a girl huddled at the side of the hallway, sobbing. The girl had just been expelled after the school found out she had vaped, Panidis said.

“I thought Catholic people were supposed to be forgiving,” Panidis said. “And you’re expelling this poor girl because she’s vaped, sure, once? It’s just so contradictory — it’s like, ‘Mitty! All are welcome, we love you, but you can’t wear a durag, or you can’t make any mistakes — you have to be perfect.’”

Panidis does not know if her experiences at Mitty reflect problems with Catholicism or the school itself, but the hypocrisy she observed was a significant factor in her eventual rejection of Catholicism and departure from the school.

During her time at Mitty, Panidis looked to strengthen her relationship with God but found her faith slipping.

Because she was unable to solidify her belief in God, Panidis felt like an intruder in her school’s majority Catholic community despite her efforts to participate in the faith. Friends would even point this out to her, occasionally saying things like “You’re not even Catholic” while at mass.

“I felt like an outsider,” Panidis said. “I thought religion was supposed to be welcoming. I didn’t find that at all.”

Despite feeling excluded within the Catholic community itself, though, Panidis found herself agreeing with the morals taught in Catholicism and at Mitty — primarily, the concept of always giving. She said that Mitty constantly organized volunteer opportunities and outreach programs, regularly encouraging students to give back to the community. Inspired by the school’s teachings, Panidis ended up volunteering at a local Goodwill and helped serve firefighters food for a period of time.

“Everything happens for a reason”

As COVID-19 rolled around, Panidis found herself spending much more time at home with her family. One day, she and her mother struck up a conversation about religion. Her mother mentioned how her grandmother back in Italy still says that their family is blessed to not have contracted the coronavirus.

“It’s like, what? Does God condemn certain people and give them COVID-19?” Panidis said. “COVID-19 or not, there’s no reasoning behind it, and that’s what I believe.”

In the conversation, Panidis’s mother, Silvia Perini, also mentioned her thoughts about God after her husband’s heart attack and quadruple bypass surgery earlier this year.

Panidis said she believed if her father had died post-surgery, devout Catholics like her grandmother who believe that, under God, “everything happens for a reason,” would have told her to not worry because “he’s in a better place” — “a horrifying thing to say,” according to Panidis.

Panidis continued that if God really had a plan for everything, she believed that she wouldn’t have had to quit ballet in the way she did.

Panidis had been in ballet since third grade, after she was inspired by Maddie Ziegler in singer-songwriter Sia’s “Chandelier” music video. She dedicated hours and hours to the activity for eight years, and only left dancing after suffering a hip injury, undergoing two surgeries that forced her to leave ballet in May 2020.

“If everything happens for a reason, why didn’t I leave ballet before I had to have two hip surgeries and mental health issues and everything I had to deal with because of it?” Panidis said. “If that’s God’s plan for me, I don’t want it.”

Despite this, Panidis wishes she could have the comfort of  justifying the turbulence in her life by referring to a divine being’s greater plan. She’s jealous of those who are religious and able to believe in God. If she were religious, she said, the world would be easier to walk through knowing a higher power was protecting her.

“I’d have faith that it’s not me, that I’m doing my best, but there’s only so much I can do because right now, there’s a guy in the sky who’s like, ‘OK, I got a plan,’” Panidis said. “I could just get all of this if I pray and go to church and don’t sin — as long as I’m golden.”

Towards the end of her sophomore year — still amidst a COVID-19 world — Panidis decided to leave Mitty and come back to the Saratoga community. She hadn’t resonated with the school as much as she’d envisioned, preferred public school over private school and felt the school had an intense athletic culture which she did not fit into anymore. Coming back to SHS, Panidis found a competitive, secular environment with a lot more physical freedom and lacking Mitty’s coddling. Aside from not being a Catholic school, Panidis thinks that Mitty and SHS are relatively the same.

“Aside from the staunch Catholics and private school kids,” she added. “I guess I just didn’t really like it, and I wanted to explore different things.”