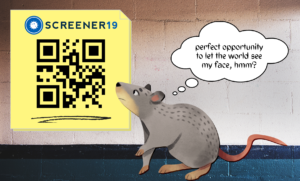 When English teacher Suzanne Herzman walked toward her room on Sept. 7, she saw a pile of scattered yellow scan codes and painter’s tape abandoned on the ground. She didn’t think too much of it.

But when her first English 9 MAP student tried to scan the Screener-19 QR code, he found himself redirected to a photo of Remy, a cartoon rat from the classic children’s movie “Ratatouille.” Herzman soon discovered that a fake paper QR code had been taped over the laminated one.

“As a media arts teacher, I can’t help but be impressed by the level of aesthetics and detail, especially when it wasn’t mean-spirited,” Herzman said. “At the same time, Screener-19 is a tool responsible for health purposes and we do have to take that seriously. I am torn.”

Six English rooms in the 000’s wing were impacted by the prank, according to assistant principal Brian Thompson. Science teacher Kristen Thomson also found fake QR codes posted outside the science building and the media arts building, while students reported similar incidents elsewhere. It is unknown how many total rooms were impacted.

The administration doesn’t yet know who was responsible for the prank, but Thompson asked teachers to move their Screener-19 QR codes to the inside. “It’s an ongoing investigation right now,” he said.